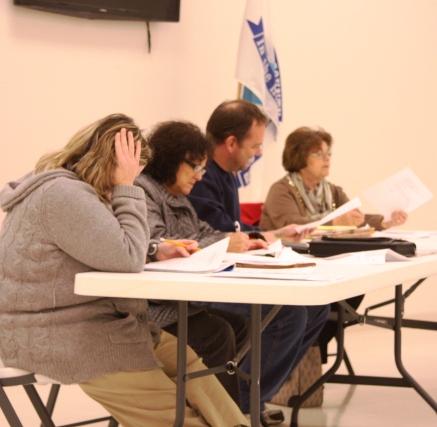 Although Kentucky Cooper was not on the agenda, discussion of the current situation with the company dominated last week's council meeting, which was held Thursday, November 13, at the Eva J. Hawes building.  According to city officials, Kentucky Cooper has not made a payment on their loan several months and time is running out for them to do so.

WarrenRECC has disconnected electric service to the Kentucky Cooper building due to lack of payment.  With cold winter weather approaching, the city had the electric turned on in the city's name to protect the building’s sprinkler system.  According to Morgantown Mayor Linda Keown, the city did not pay the back bill owed by Kentucky Cooper.

“We have to protect the building from freezing water lines due to insurance,” said Keown.

According to Councilman Terrell House, Kentucky Cooper has until December 31, 2014 to make their payments.  If the company fails to make the necessary payments, then the city will have to start making payments in January 2015.  When asked the amount of the payment, city clerk Anita Gossett said there are two loan payments - one for $9,988 and the TVA loan for $7,298 for a total payment of $17,286. The council and their attorney have met with the officials of Kentucky Cooper on several occasions trying to work out the problem.  According to Councilman Gary Southerland, Kentucky Cooper is having a cash flow problem and is trying to raise investment money .

“We have done the best we can; we are all worried but hopefully Kentucky Cooper will come through,” said Councilman Allen Meredith.

At this point it is a wait-and-see situation.

Prior to the City Council meeting the Industrial Holding Corporation (I.H.C.) held a called meeting.  The I.H.C. consists of City Council members. Kendall Embry of Embry & Watts CPAs, who is the city accountant, explained to the I.H.C. the need to include their budget under the city budget.

“The I.H.C. is considered a special-purpose government entity and is part of the city,” said Embry.

The council approved adding the I.H.C. budget into the city's budget.

The council recognized Casey Turci for his work on city sidewalks and the volunteers that cleaned  Bell Cemetery.  Several people, including Roger Givens, Bobby Keown, Royce Keown, and the jail work crew cleared several areas of the cemetery.

The M.P.D. will be adding two new cars to their fleet this week.

“We have two Dodge Chargers getting the graphics put on as we speak.  They should be out sometime next week,” said Swiney.

In other business, the council reappointed James Dossey to the Housing Authority Board and approved the first reading of the amendments to the 2014-15 budget.

Mayor-elect Billy Phelps and Councilman-elect Ronald Givens were both in attendance.