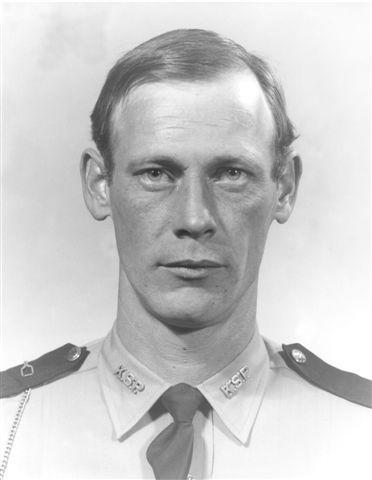 Phelps' son Darren placed the wreath on his father's grave.

Trooper Darrell Vendl Phelps, age 34, was fatally shot August 7, 1981, while investigating illegal cultivation of marijuana in Edmonson County, Kentucky. Trooper Phelps was assigned to Post 3 as a detective. Trooper Phelps was an 11-year veteran of the Kentucky State Police. In honor of his service and sacrifice, an eight-mile stretch of KY 1153 in Butler County has been designated the Det. Darrell Vendl Phelps Memorial Highway.

"As a law enforcement officer, my fundamental duty is to serve mankind; to safeguard lives and property; to protect the innocent against deception, the weak against oppression or intimidation, and the peaceful against violence or disorder; and to respect the constitutional rights of all persons to liberty, equality, and justice.
"I will keep my private life unsullied as an example to all; maintain courageous calm in the face of danger, scorn, or ridicule; develop self-restraint, and be constantly mindful of the welfare of others. Honest in thought and deed in both my personal and official life, I will be exemplary in obeying the laws of the land and the regulations of the agency. Whatever I see or hear of a confidential nature, or is confided to me in my official capacity, shall be kept secret unless revelation is necessary in the performance of duty."

"I will never act officiously or permit personal feelings, prejudices, animosities, or friendships to influence my decisions. With no compromise for crime and with relentless prosecution of criminals, I will enforce the law courteously and appropriately without fear or favor, malice or ill will, never employing unnecessary force or violence and never accepting gratuities."

"I recognize the badge of my office as a symbol of public faith, and I accept it as the public trust to be held as long as I am true to the ethics of police service. I will constantly strive to achieve these objectives and ideals, dedicating myself before God to my chosen profession, law enforcement."

On October 1, 1962, U. S. President John F. Kennedy signed into public law a joint resolution of the 87th Congress designating May 15 as Police Officer's Memorial Day in honor of federal, state, and municipal peace officers who have been killed or disabled in the line of duty. Each year, the calendar week in which May 15 falls is called "Police Week." The 2021 National Peace Officer's Memorial Week has been designated May 10-16, 2021.

During this week, fallen officers from across the country will be honored in both public and private ways. As a part of the Kentucky State Police's annual observance of this somber time, wreaths are place on the graves of fallen officers who died in the line of duty while serving this great Commonwealth.