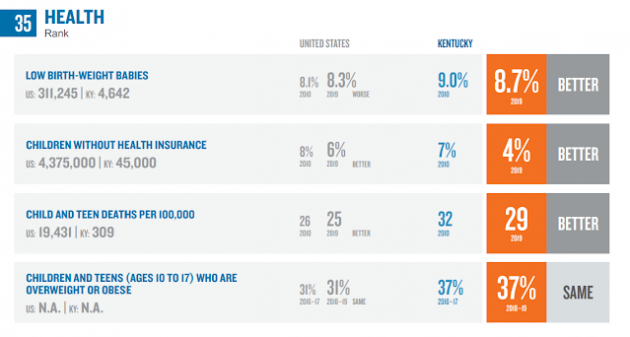 The annual Kids Count Data Book on children's well-being, released June 21 by the Annie E. Casey Foundation and Kentucky Youth Advocates, again ranks Kentucky 37th in the nation for the overall well-being of its children.

The latest data are for 2019, and are largely compared with data from 2010. The report rates children's overall well-being through 16 indicators in four major domains: health, economic security, education and family and community.

Overall, Kentucky saw improvement in 11 of the 16 indicators, did worse in three of them and stayed the same on one. One measure did not show a comparison.

“Though the commonwealth made progress on a number of indicators of child well-being between 2010 and 2019, rankings show we are not making progress as quickly as other states – and that progress is in jeopardy unless federal and state policymakers act boldly to sustain the beginnings of pandemic recovery efforts,” Terry Brooks, executive director of Kentucky Youth Advocates, said in a news release.

Nearly one in four Kentuckians are children. Here's a look at each domain.

Health: Kentucky's health ranking improved this year, to 35th. Last year's report ranked Kentucky 42nd after changing one of the domain's indicators to measure childhood obesity instead of youth alcohol and drug abuse. The last report to use the original indicator was in 2019, when the state ranked 25th for health. 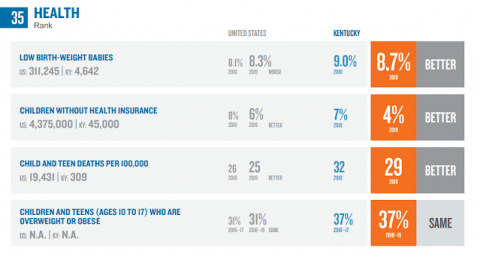 The report says 37 percent of Kentucky's children were either overweight or obese in 2018-19, the same as in 2016-17. The national rate is 31%. Kentucky has the highest childhood obesity rate in the nation.

Kentucky continues to have a low rate of children without health insurance, 4%. The national average is 6%. The news release reports that about  45,000 Kentucky children remain uninsured.

Another indicator of children's health is the rate of babies born weighing less than 5.5 pounds. That is 8.7% in Kentucky, where it has hovered for years. 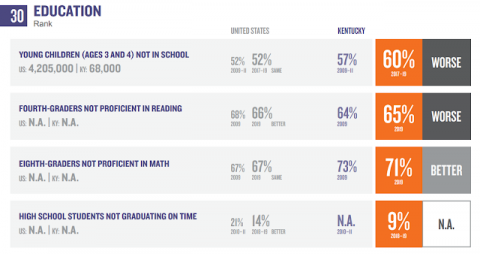 The best news in this category is that 91% of Kentucky high-school students graduate on time. 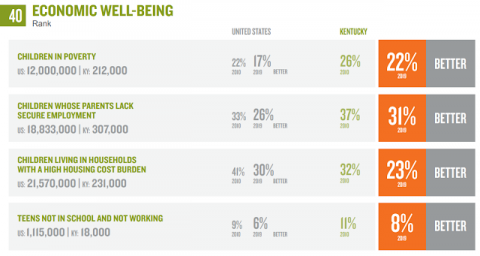 Also, the percentage of children living in households with a high housing cost burden dropped to 23% in 2019 from 32% in 2010.  A high housing-cost household is defined as one where more than 30% of monthly household pre-tax income is spent on housing-related expenses, including rent, mortgage payments, taxes and insurance.

Family and Community: Kentucky ranked 43rd in the family and community domain, down from 41st in last year's report. 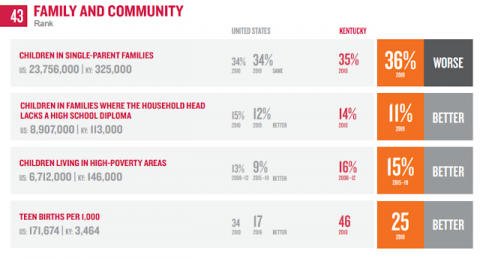 Impacts of the pandemic

"We cannot talk about child well-being in any meaningful way in this moment — or address the considerable challenges America’s children and families now face — without discussing the effects of the coronavirus," Lisa M. Hamilton, president and CEO of The Annie E. Casey Foundation, writes in the foreword to the report.

To capture the impact of the last year, the Data Book takes a look at information collected in the Household Pulse Survey, which the report says was conducted in multiple waves since the onset of the pandemic by the Census Bureau and is the only source of robust national and state data related to the pandemic.

“The supplemental pandemic-era survey data highlighted in the Data Book gives us a clearer picture of how families are faring today, including the disproportionate impact the pandemic has had on families of color," said Brooks.

Key findings about Kentucky children in the supplemental report include:

--In 2020, one in five (20%) Kentucky adults with children in their household had little or no confidence in their ability to make their next rent or mortgage payment, with the highest rates experienced by Black families (40%) and Latinx families (30%). By March 2021, the statewide rate was at 15%, suggesting the beginnings of a recovery.

--15% of Kentucky households with children reported sometimes or often not having enough food to eat throughout 2020 – a family stressor that hit Black households (26%) and a combination of smaller racial groups (American Indian, Alaska Native, Pacific Islander, Native Hawaiian and those of more than one race) the hardest (29%). This statistic only slightly improved overall in March 2021 to 13%.

--More than one in four (26%) Kentucky adults living in households with children felt down, depressed, or hopeless in 2020, with only slight improvement (22%) by March 2021.

Brooks, of Kentucky Youth Advocates, said, “The commonwealth can and will bounce back from the ripple effects of the pandemic, and a key component of that is ensuring kids and families have the resources to meet basic needs and overcome daily challenges.”

Brooks praised the state's leaders for supporting children during the pandemic, by supporting child care, using federal funds to address the pervasive "digital divide," and ensuring schoolchildren have access to food while learning at home through the pandemic EBT program.

KYA wants Congress to make the expansion of the child tax credit permanent, and wants Kentucky to enact its own refundable earned-income tax credit; to focus on increasing access to high-quality child care; to use federal funds to improve school-based mental-health supports for students; to expand school-based nutrition programs; to allow state employees 12 weeks of paid family leave after the birth or adoption of a child; and to double down on efforts to support families involved in the child welfare system.

The Kids Count Data Center provides current and trend data for child well-being indicators related to each of the four domains in the report, at both a state and county level. It also offers a feature to create customized tables, maps, bar charts and graphs.