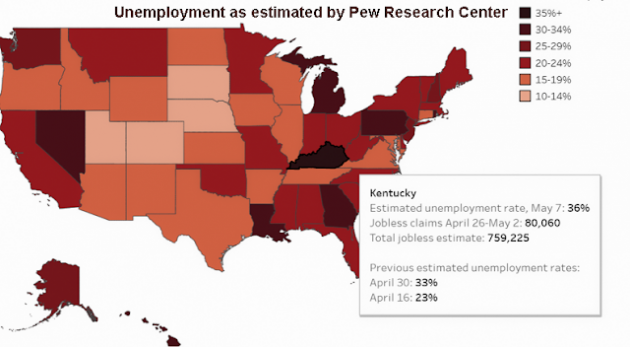 By three separate estimates, the coronavirus pandemic has given Kentucky has the worst unemployment rate in the nation.

Fitch Ratings, which issues credit opinions on governments and other borrowers, said in a report Thursday that unemployment claims as a percentage of the labor force in Kentucky have totaled about 33 percent, the highest among the states.

Fitch "compared cumulative and advance initial claims filed since the week that ended March 14 as a percentage of the March labor force," reports Bill Estep of the Lexington Herald-Leader.

"A separate analysis released Friday by the Economic Policy Institutereached a similar conclusion," Estep reports. "It put jobless claims in Kentucky in the eight weeks ending May 2 at 32.3% of the labor force, the highest in the nation."

A somewhat different analysis estimated an even higher number for Kentucky, 36%, and likewise had it the highest in the country. That was by Stateline, an initiative of the Pew Charitable Trusts.

"Kentucky, Hawaii and Georgia have seen jobless rates rise to more than a third of the workforce, and five other states — Louisiana, Rhode Island, Pennsylvania, Michigan and Nevada — are now north of 30%," Stateline's Tim Henderson reports.

Henderson told Kentucky Health News that he used labor-force figures from mid-February. He said his exercise produced a national rate of about 22%, about 7 percentage points higher than the national rate of 14.7% announced Friday by the Bureau of Labor Statistics. He noted that the BLS said its rate would have been about five points higher if it had included workers who have been temporarily furloughed but not laid off. Kentucky and many other states are paying unemployment benefits to such workers and others who don't normally qualify for the benefits.

Why is Kentucky's rate so high? Michael Clark, associate director of the University of Kentucky's Center for Business and Economic Research, told CNN that the state has many manufacturing jobs, which "are harder to work remotely, maybe simply impossible to work remotely. They're going to be subject to greater job losses during these times of restrictions." He said when big auto plants like Toyota in Georgetown and Ford in Louisville close, it leads to job losses at supplier plants.

Gov. Andy Beshear said Friday that the state has paid 690,000 claims totaling $1.2 billion. The state has had great difficulty handling all the claims and working out problems with them. Chris Otts of Louisville's WDRB-TV said on KET's "Comment on Kentucky" Friday night that one major problem is claimants who didn't check the box on the claim form saying that they were ready and available for work.