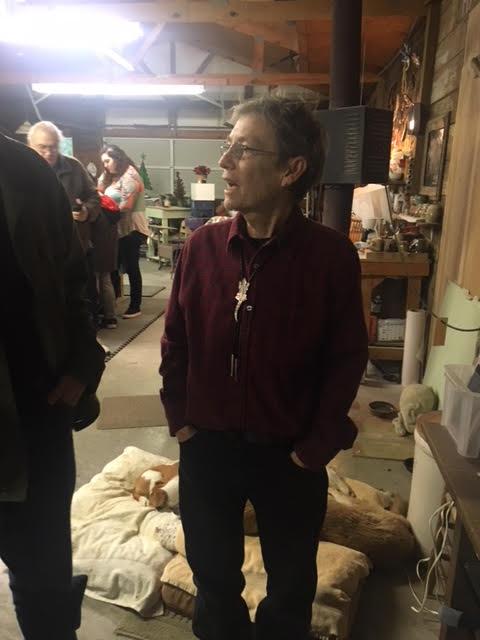 Karen Genter told me that while she was a student at WKU in the sixties that photography was not considered an art form.  This confounded me…how was photography not considered to be an art?  She said at the time the only way photography was considered art was if you were using a photograph to create a painting or a sculpture.  After graduation Karen began teaching art in elementary education.  She said she really enjoyed teaching the younger students because they were so free and non-judgmental in their views of life. Young children are blank canvasses themselves you could say, eager to create anything with paints and clay because coloring inside the proverbial lines doesn’t matter to them yet. Karen was able to see photography as art, I suppose this was her way of “coloring outside of the lines” as well.

Before her retirement in 2007 she worked as teacher, engineer, and computer analyst. Throughout the years she steadily practiced her passion for the arts, but in the eleven years since she retired, she has been able to devote her love and attention to it full time.  When I met Ms. Genter, she was displaying several of her prints, paintings, and handmade flutes.  The light in her photographs display the various colors in the landscapes she has captured through her lens making you feel as if you are there in person.  When looking at pictures of sun kissed canyons out west you will feel the warmth of the sun on your face. When looking at pictures of exotic plants in the jungle you can smell the dew in the air…you get the picture.  Her photos can transport you to where they were originally taken, allowing you to see parts of the world from a different view.

The flutes are her latest addition to her artistic endeavors.  When asked how she came to make flutes she stated that her partner had attended a conference and had returned home with one made from bamboo.  She wouldn’t let her play it because she was scared she would play it better than her.  However, after a week, Karen was allowed to examine the flute and was fascinated by how it was made.   Karen had been growing bamboo at her home and wanted to make something out of it and decided she too would learn to make the flutes.  Soon after she set up a makeshift shop in her basement.  However, she quickly learned that it was not as easy as it looked.  After several tries to get the mechanics and acoustics correct, she began adding them to her collection for sale.  Each flute she offers is handmade and unique.  The colors of the flutes are beautiful.  Even if one did not know how to play the flute, it would still be a beautiful piece of art to display.

Karen has two studios that she splits her time in between.  Studio G is in Bowling Green, Kentucky while she also has a home and studio in Newburgh, Indiana. If you are interested in viewing her art or making an appointment to discuss commissioned pieces you can reach out to her at the following: