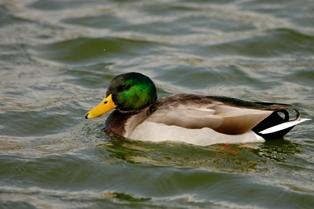 Excellent breeding conditions this past year in the northern Prairie region and Canada should mean productive hunting for the opening of duck season Thanksgiving Day. "Every population of every species but widgeon are holding their own or up big time," said John Brunjes, migratory bird biologist for the Kentucky Department of Fish and Wildlife Resources. "There are lots of birds out there and it should be a better than normal season, but it is all weather dependent. The combination of what Mother Nature has in store for us will determine the success of the duck season."
Duck populations are at their highest levels since the population surveys began in the mid-1950s. Biologists report 16,000 ducks at Ballard Wildlife Management Area near the confluence of the Ohio and Mississippi Rivers in Ballard County right now. Mallards make up about 75 percent of those ducks. "Duck numbers in Louisiana are up 20 percent from last year," Brunjes said. "There are birds here and birds already south of us." Brunjes recommends hunters scout potential areas for duck use before setting up to hunt. "We had unusual weather this past spring," he said. "The wet spring provided lots of food. There is a great deal of natural vegetation in places that don't normally have it, so you'll need to scout places where you normally don't look."
He used the example of our large reservoirs. Usually, they rise in spring and stabilize into their summer pool by June. Vegetation sprouts along the bank during summer and provides food for ducks. "Quite a few of the reservoirs were way above summer pool for big chunks of the summer," he said. "These lakes would normally have vegetation on the banks for ducks to use, but don't this year."
Croplands, especially from west-central Kentucky to the Mississippi River, are spotty as well from this past spring's flooding. "They can be good or they can be incredibly bad," Brunjes explained. "There was water on some of those fields into June and July."
Farm ponds could be the saving grace for duck hunters this fall. "Ponds have strong potential to be extremely good this season," Brunjes said. "Look for the ponds ducks are using right now and try to get permission to hunt there."
Goose season should be productive as well. Population surveys conducted last spring showed the highest number of nesting geese in Kentucky ever recorded. The numbers of migrant geese that travel through Kentucky remain about the same.
Canada geese are big, loud birds, so pay attention over the next week to areas where they congregate. "There are two main things with goose hunting: getting permission and finding where they are feeding," Brunjes explained. He recommended hunters abandon unproductive places in favor of those holding birds. "They are creatures of habit," he said. "You can't convince a goose to go somewhere they don't want to go. If you set up in a field next to a place with a lot of geese, they are much less likely to come to your new stuff. Go to where the geese are."
Many landowners with numbers of geese using their property will grant permission to hunt them because they can become a nuisance. "Don't be afraid to ask permission," Brunjes said. "You'll be surprised how many will let you hunt."

Duck populations are at their highest level since surveys began in the mid-1950s. Duck hunting should be productive for the upcoming duck season that opens Nov. 24. Biologists recorded more nesting geese in Kentucky than ever before while conducting population surveys this past year. Abundant numbers of geese await hunters for the Nov. 23 opening of goose season. Duck season opens in all zones Nov. 24 and closes Nov. 27. Duck season opens again Dec. 5 and closes for good on Jan, 29, 2012. Goose season opens Nov. 23 in all zones but the Northeastern Goose Zone where the season opens Jan. 1, 2012. Goose season closes Jan. 31, 2012 in all zones.
For more information on the upcoming waterfowl seasons, get a copy of the 2011-2012 Kentucky Hunting Guide for Waterfowl, available free wherever licenses are sold. You may request a copy by calling 1-800-858-1549 or print a copy from the Kentucky Fish and Wildlife homepage on the internet at fw.ky.gov.