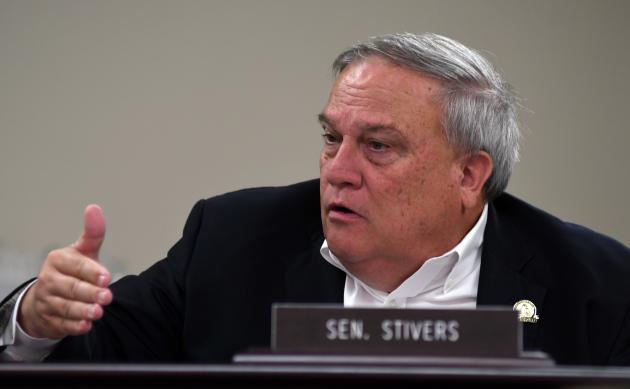 FRANKFORT— A Tennessee state representative spoke with Kentucky lawmakers on Thursday about a new Tennessee law requiring people convicted of vehicular homicide due to intoxication to pay child support to each of the victim’s children.

Tennessee Rep. Mark Hall, R-Cleveland, testified before the Interim Joint Committee on Judiciary that Tennessee was the first state to pass this type of law, and at least 14 other states have proposed similar legislation.

Hall said he believes the bill, Tennessee House Bill 1834, is a “common sense approach” to addressing driving while intoxicated offenders.

“(The law) does two things. It protects our greatest resource, which is our children, and also holds the drunk drivers accountable,” Hall said.

Senate President Robert Stivers, R-Manchester, asked Hall if a wrongful death lawsuit would offset some of the child support obligation or not. Committee co-chair Rep. C. Ed Massey, R-Hebron, questioned how the bill requires the person to make the payments.

“The person may be incarcerated, etc., and may not have any financials to (make payments). Some could say it’s an empty shell, but is there like a restitution order that would go with that?” Massey asked.

Hall had a similar answer to both questions. Tennessee’s law is open-ended, which gives the district attorneys and judges discretion to decide whether or not a child support order would be appropriate on a case-by-case basis, he said.

Payments, however, would not begin until one year after incarceration. Hall said there will be a formula in place much like the one used in divorce proceedings to determine payment amounts.

Sen. Karen Berg, D-Louisville, asked if a person who can’t afford to pay the child support would be charged with another crime.

Massey said under Kentucky law, if the amount owed reached $5,000 and was a contemptible arrearage then the person could be put in jail.

Since the Kentucky General Assembly adjourned on April 14, legislators cannot file or take action on any new bills until the 2023 legislative session begins on Jan. 3. Massey said Thursday’s discussion with Hall was for the committee to find out more about Tennessee’s law as lawmakers consider whether or not they want to pursue similar legislation next year.

The next Interim Joint Committee on Judiciary is currently scheduled for July 7 at 11 a.m.

For a the full interim calendar, visit http://legislature.ky.gov/Schedules-Calendars