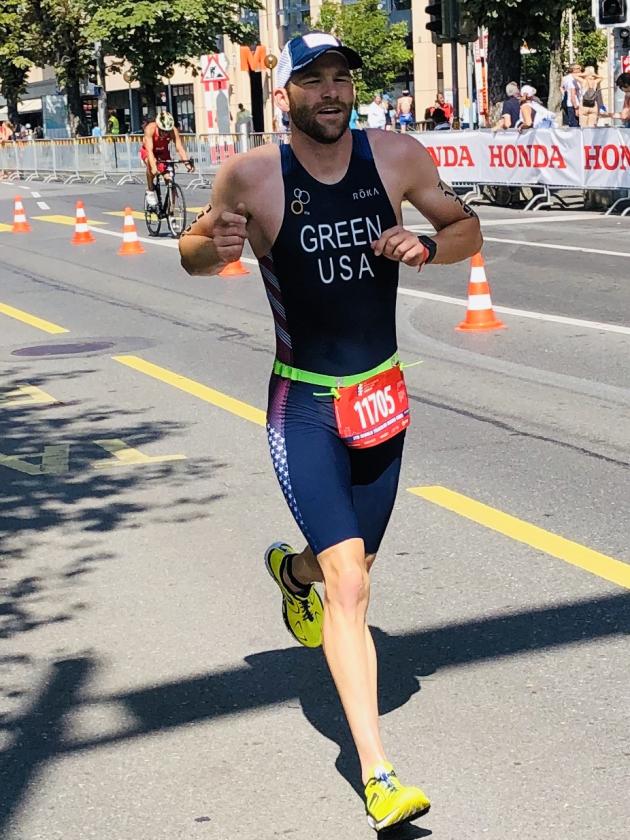 Lausanne, Switzerland played host to the 2019 ITU World Triathlon Championships and representing USA was local triathlete Jordan Green. The best age group triathletes in the world gather each year at the grand finale to compete for the world championship at stake.

Jordan was honored to spend a week in Switzerland gathering new experiences and culture making new adventures and racing against the best triathletes in the world. The country lived up to its reputation of a country steeped in beauty, and class. He was granted the opportunity to meet people from all over the world, form new friendships with fellow USA athletes, and make memories with his family during the trip.

As for the racing… Jordan had no expectations other than to give it his best effort and to represent his country to its fullest. The first race was the Sprint Triathlon where Jordan finished 18th overall in the 25-29 age group (3rd American) in a race of over 3,000 competitions. The sprint distance race was his first draft legal race and it proved to be much different than he expected and what he was used to. His 84th overall finish in the field was very encouraging.

Race #2 was the Olympic distance race which was much more comfortable and familiar to him. The technical bike course of steep hills, tight turns, and mixed with blazing downhills made the course tricky and dangerous. He navigated the course smoothly and even said, “The cheers of “USA” and words of encouragement from the fans helped him as he completed the race. He crossed the finish line 10th overall in the 25-29 age division (2nd American) and 33rd overall in the race of over 2,200 athletes.

The trip and journey along with the racing has been a humbling experience and has taught him how large the world actually is. He said, “I am very happy with the race performances and results but not satisfied.” The journey does not end here as he is already qualified for both races at the 2020 ITU World Championship that will be in Edmonton Alberta, Canada. His goal is to be better prepared and more focused on race expectations moving forward.

Thank you to everyone who has supported and made this dream a reality. Jordan is the one racing but there is a team of supporters who make it happen over the course of a season. A “special thanks” should be extended to Hidden Lakes (Chase and Ashley Ingram), Morgantown Bank & Trust, Jenkins Lawn Care (Dwight and Allison Jenkins), and Bowling Green Athletic Club.