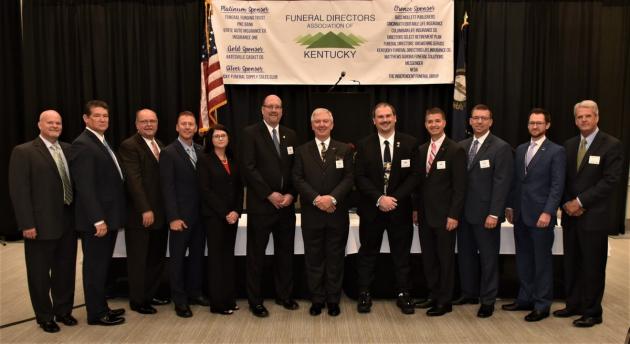 Marty Jones of the Jones Funeral Chapel in Morgantown, KY was sworn in as President- Elect of The Funeral Directors Association of Kentucky at their 137th Annual Convention held at the Crowne Plaza Hotel and the Kentucky Exposition Center in Louisville on June 4-6, 2019.  During this three-day meeting, 50 and 100-year-old firms were honored; 50, 60 and 70 year Kentucky licensed funeral directors; as well as over 30 funeral directors from across the state received continuing education awards.  There were over 75 exhibiting companies displaying in the Exhibit Hall and over 300 attended  Kentucky Mardi Gras Carnival on Wednesday evening.  Several educational seminars/presentations were offered totaling 14 hours of Continuing Education. The 2019-2020 leadership was elected as follows:

Chairman of the Board      David West, Nicholasville