Jenkins, Woodcock featured in the Battles in the Bluegrass 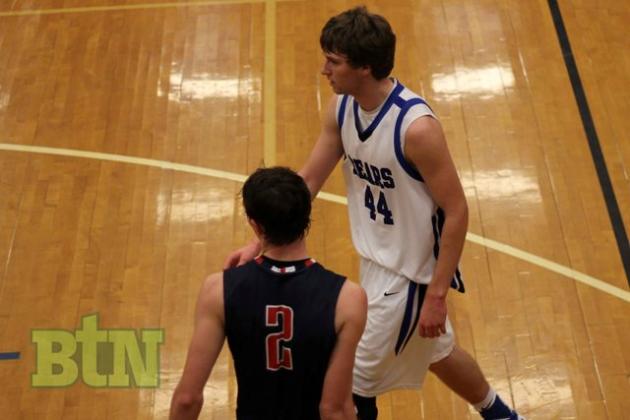 Although the battle on the hardwood is over, the Butler County Bears and the Ohio County Eagles are still battling it out online. The recent Bears vs. Eagles basketball match-up was featured by Bluegrass Cellular as one of their Battles in the Bluegrass. The top four plays of the game were selected and are open to voting online. The four plays are the slam dunk by Ohio County Junior Jonathan Wortham, Butler County Sophomore Zeke Woodcock getting the rebound and scoring, OC Sophomore Trevor Lewis scoring under pressure, and BC Sophomore Trevor Jenkins nailing the long 3.

Battles in the Bluegrass was started by Bluegrass Cellular as a way to promote high school athletics during the 2010 football season. These games feature teams that have a history of being rivals whether it is on the turf or the hard court. The Butler County vs. Ohio County basketball game was selected for the Battles in the Bluegrass through an online vote on the programs web site. The three other games selected for this promotion are North Hardin vs. Elizabethtown, Glasgow vs. Barren County, and Corbin vs. Whitley County.

The Battles in the Bluegrass is comprised of three phases: phase 1 consists of the two teams squaring off against each other, phase two selects the top play of the game and pits the two top plays from each team against one another, and phase 3 selects the play of the season from the top play selected each game. The top vote-getters from phase 2 win their school $250 and the winner of the play of the season will net $1,000 for their school from Bluegrass Cellular.

Phase 2 is currently underway for the BC-OC game. As of now, the top vote-getting play is the dunk by Jonathan Wortham. There's still time to cast your vote, however, as the voting remains open through 11:59 p.m. on February 5. You can cast your vote, as well as view highlights of the game, by accessing the Battles in the Bluegrass web site at
http://bluegrasscellular.com/battles/ohio_county_vs_butler_county.