It's in the Love, Not the Blood: Never Give Up Hope 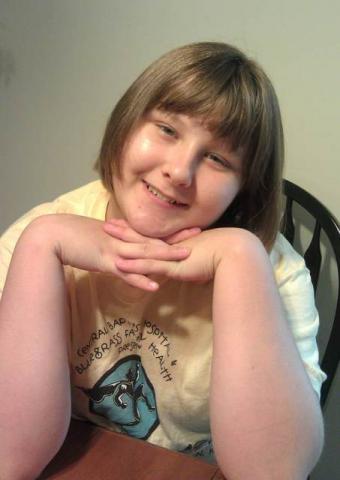 Never Give Up Hope
by Jason A.

When Jason was 13, he won first place in a writing contest. The essay question was, "What advice would you give to the person you were five years ago and why?" Below is his award winning response.

Five years ago, I was just a confused and scared little boy of eight years old. I had lost all that I had ever known, yet believed that my mom would somehow change and that she would do the right things to get me back.

To make a long story short, she didn’t. She just dropped out of my life. As I went from one foster home to another, I lost hope. I was put in a children’s home where I stayed for a long time.

Lisa H. was my social worker. One day she told me that a man wanted to adopt me. I was real hopeful but really scared. I was afraid that he wouldn’t like me after he met me. What if I was adopted and it turned out to be just like the foster homes? If that happened, then I just thought I would die.

The man came up in the early spring. I was so nervous about meeting him. He was late. When they told me that he was lost in traffic, I knew that he had changed his mind and left. Why shouldn’t he? So many others had.

I had gone to the gym to shoot some hoops when they came and told me that he was here and was waiting to meet me. My stomach felt sick. I didn’t want to meet him. I was so afraid that he wouldn’t want me after he saw me. I walked in and there he was. He spoke to me and smiled. Some of my nervousness began to leave.

He was tall and had a beard. I went over to him and gave him a hug. He was a nice man after all. We spent the rest of that day together and I went with him the next day. He was easy to know and I knew this was what I had wanted.

To make the story short, the man adopted me and now he is my dad. I’ve been with him for three years. It is like I have been with him forever. I have brothers and he adopted all of them. We have lots of fun even though Dad gets on us about homework and chores sometimes.

My dad has shown me how a real dad should be. He can be tough as nails, yet I’ve learned to trust and to love him because he is kind and funny. We do lots of neat stuff and Dad has taken us all over the American West. With my brothers and me around, we never have a dull moment.

I put Dad through some tough tests. He passed them all, but I had to see if he really wanted me. After a tough time, I told Dad that I was sorry for making it so hard on him and tried to explain that I just had to know. He looked at me and finally smiled and said, "Son, if you are going to test me, why don’t you just write it down on paper and let me pass it that way? If you will, it will save me from stripping a gear and having gray hair." My dad is the best.

Today I am 13 years old, have passed seventh grade, play the trumpet, and am in honor band. My grades are good and I have a real family.

The advice I would give the person I was five years ago is to be calm. Don’t worry so much. Youth don’t know the future but that doesn’t mean it’s going to be bad. Never give up hope because a stranger to you can become the man you will call Dad.

Postscript: Jason is 15 now, a sophomore in high school and is studying for his learner’s permit.  Jason’s family has grown to include six brothers, which he says they are all pretty cool most of the time. Jason is looking forward to finishing high school and going to college. Jason states that his dad taught him to dream, and that he still have a lot of hope for the future.

C. Denise Lambrianou is the Program Coordinator for Family Enrichment Center-Adoption Resource Program, which is funded in part by a grant from the Cabinet of Health and Family Services, Department of Protection and Permanency and Wendy’s of Bowling Green.  If you would like information about becoming a foster or adoptive family, or you would like to inquire about a featured child, please call (270) 781-6714 x 3 or (866) 842-9032 x 3.

Meet Sierra:
Sierra is a 13 year old who is currently in the 7th grade in all regular classes and enjoys school, her classmates and teachers.  She is capable of working above average in her school work and continues to improve in her studies with her favorite subject being Chorus.  Sierra is very warm, outspoken, friendly, and happy.  Others would also describe her as being very affectionate.  She is able to relate well with other children and adults.  Sierra expresses interest in beginning to participate in running track at her school.  She also enjoys spending time with her friends at church and in the neighborhood.  Sierra enjoys animals and taking care of pets.  During her down time, Sierra like doing puzzles. Sierra wants to move forward with her life by obtaining a new family that will be a forever home for her.  Could you be the family to help Sierra positively continue with her life and encourage her to be successful in her adulthood?