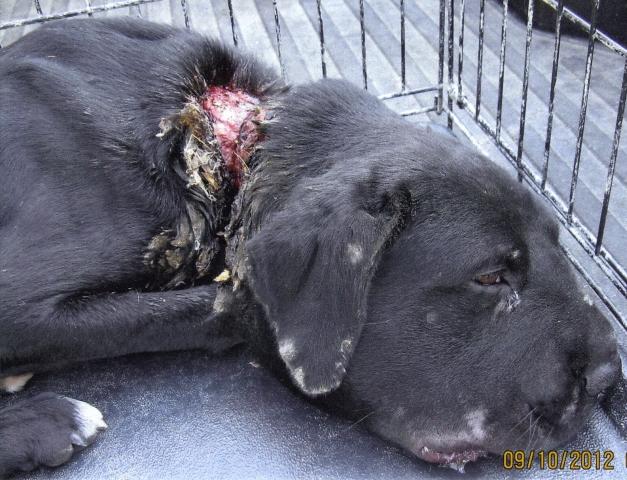 The Humane Society of the United States is offering a reward of up to $2,500 for information leading to the identification, arrest and conviction of the person or persons responsible for abusing a dog in Rochester, Ky., by placing a large rubber ring around his neck.

The Case: News reports give the following account: On Sept. 10, several residents in Rochester reported seeing a severely emaciated dog with a large rubber-like band fastened tightly around his neck near Ferry Street. Good Samaritans attempted to approach the dog and noticed that the highly-restrictive collar made his entire head swollen and prevented him from lifting his head.  On Sept. 11, one of those citizens finally captured the dog--a  2-year-old to 3-year-old male, black Labrador-mix dog-- on Russellville Street near the post office. Named Chance, the dog was immediately taken for emergency veterinary care.  Veterinarians discovered that someone had placed a constricting rubber ring around his neck, which severed his trachea. Chance was transferred to a specialty veterinary clinic for surgery, but died of his injuries before the scheduled operation.

Animal Cruelty: Getting the serious attention of law enforcement, prosecutors and the community in cases involving allegations of cruelty to animals is an essential step in protecting the community. The connection between animal cruelty and human violence is well documented. Studies show a correlation between animal cruelty and all manner of other crimes, from narcotics and firearms violations to battery and sexual assault.

“This poor dog suffered terribly and was unable to eat or drink because of the cruel heart of one or more persons,” said Pamela Rogers, Kentucky state director for The Humane Society of the United States. “We hope our reward will help find whoever is responsible for this horrible crime and that Chance's abuser gets the maximum penalty for such a despicable act.”

The Investigators: The Butler County Sheriff’s Office is investigating. Anyone with information about this case is asked to call Sheriff Scottie Ward at 270-526-3676.

Resources: The HSUS Animal Cruelty Campaign raises public awareness and educates communities about the connection between animal cruelty and human violence while providing a variety of resources to law enforcement agencies, social work professionals, educators, legislators and families. The HSUS offers rewards in animal cruelty cases across the country and works to strengthen laws against animal cruelty.http://www.humanesociety.org/news/press_releases/dog_cruelty_reward_0921...

Reprinted by permission from the Humane Society of the United States.