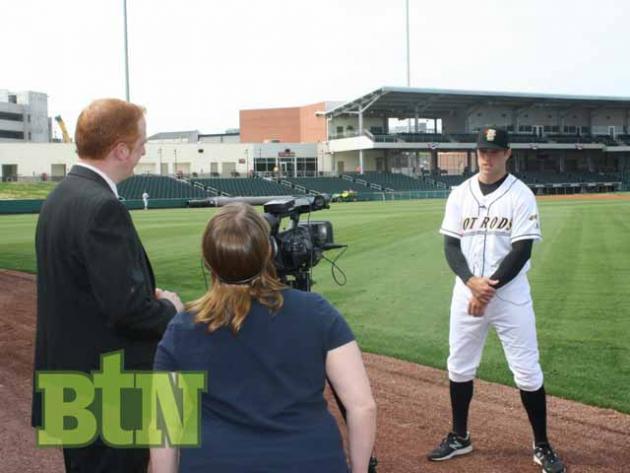 Beech Tree Radio 1570 AM WLBQ has once again partnered with the Hot Rods for a Saturday night "Game of the Week."  Official game time on Saturday is 7:05 but the pregame broadcast will commence about 30 minutes prior to the game.

Representatives from multiple media outlets across south-central Kentucky were on hand Tuesday to meet the Hot Rods, conduct interviews with players and coaches, and take plenty of photos.  Players also recorded promo spots to be used throughout the season.  Manager Brady Williams was a hot commodity as several reports flocked to him for a preview of what he expects from his 2012 team.

The Bowling Green Hot Rods, Class A Affiliate of the Tampa Bay Rays, are coming off a successful 2011 campaign in which they notched a franchise-best 77 wins and made the playoffs before falling to the Ft. Wayne TinCaps.


Bowling Green, KY - On behalf of the Tampa Bay Rays, the Bowling Green Hot Rods, the Rays' Class A Affiliate, announce their preliminary 2012 Opening Day roster. Former Western Kentucky University stars Kes Carter and Matt Rice return to Bowling Green less than one year from being selected by the Rays in the 2011 First-Year Player Draft. The former Hilltoppers are joined by a talented crop of Rays' Minor Leaguers, including 2011 first rounders Jake Hager and Tyler Goeddel and 2010 first rounder Drew Vettleson.

Kes Carter became the highest draft selection in the 92-year history of the Western Kentucky baseball program when he was selected 56th overall in the supplemental first round of the 2011 First-Year Player Draft. The Brentwood, TN native was a two-time All-Sun Belt Conference honoree during his three years with the Hilltoppers. An injury limited Carter to just three games with the Hudson Valley Renegades during his professional debut last season.

Carter's college teammate and fellow Tennessean Matt Rice was also selected by the Rays in the 2011 First-Year Player Draft when he was chosen in the ninth round. The Johnson City native finished his four-year career at WKU as the school's all-time leader in hits and runs batted in. Rice began his professional career last season with the Hudson Valley Renegades where he batted .286 and hit three home runs in 54 games.

The rest of the Hot Rods position players are highlighted by talented prospects OF Drew Vettleson, SS Jake Hager, and 3B Tyler Goeddel. Baseball America ranks Vettleson as the Rays' ninth-best prospect coming in to 2012 after hitting .282 with 24 extra base hits in his pro debut with Rookie-level Princeton last season. The 19-year-old Hager performed well enough in Princeton last season to enter 2012 as one of the Rays' top shortstop prospects in a deep class. Goeddel, who will make his professional debut with the Hot Rods, was selected in the supplemental first round last year and was the fifth of ten Rays' first round selections.

The Hot Rods pitching staff will be anchored by talented prospects RHP Parker Markel and LHP Felipe Rivero to start the season. Markel posted a 3-4 record with a 3.14 ERA last season in 13 starts with Hudson Valley and is regarded as the Rays' sixteenth-best prospect by Baseball America entering the season. Rivero, a Venezuelan native who made his United States professional debut last season with Princeton, is regarded as another talented Rays' left-handed prospect.

Other notable names on the team's preliminary Opening Roster are RHP Jason McEachern, LHP Justin Woodall, and 1B Cameron Seitzer. Fans will recognize McEachern, who spent all of 2010 and parts of 2011 with Bowling Green. In 31 games (28 starts) over two seasons with the Hot Rods, McEachern is 5-13 with a 5.91 ERA. Seitzer's father Kevin played 12 Major League seasons (1986-97) with the Royals, Brewers, A's, and Indians.