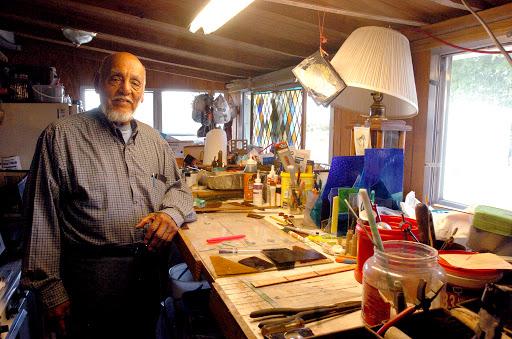 Handcrafted signs an effective witnessing tool for man who was overlooked as he worked in churches...

Wherever 89-year-old Leo Hernandez goes, you can be certain he carries something in his hands to use as a tool to share the gospel.

The intense desire Hernandez has to tell people about Jesus was fueled by his personal experience — a story that many believers will find unsettling. He worked in churches most every day for four years, but no one ever shared the gospel with him.

Hernandez was working for a stained glass business in Evansville, Ind., and his job carried him into one church after another installing stained glass windows. The churches were friendly to him and sent letters of appreciation to his employer about the great service he provided. But never did anyone in those churches ask him if he knew Jesus Christ as Savior.

It wasn’t until 1982, when he was 52 years old, that Hernandez accepted Christ as Savior. He was visiting his brother, Alex, in Chicago when his sister-in-law, Mary, told him he needed to be born again. His immediate response — “What are you talking about?”

Mary kept talking to Hernandez about the Lord and told him, “Alex will go to church if you will.”

That provided the incentive for Hernandez to attend the service. He doesn’t remember all that was said, but he does remember “the Lord made everything clear to me” about his need for salvation. He saw Mary lean over and talk to Alex at the altar, “and the next thing I knew I was at the altar.”

Two years later, Hernandez and his wife, Paula, moved to Quality, Ky., a small community in Butler County, and they began attending a nearby Pentecostal church. Hernandez related his salvation experience and the fact that people must be alert to witnessing opportunities.

Hernandez recalls the pastor telling him, “That’s exactly what I have been telling my people — they better be witnesses.” The pastor said, “The Lord is going to open those windows of heaven to you as you witness.”

Hernandez reflected on how people had failed to witness to him, and was resolved to not follow that path. He made it a priority to tell people about Jesus through his homemade signs and stained glass/painted glass projects. Making those items proved easy for him — he didn’t learn from a book or manual, but just by looking at what others had created.

His life took an unexpected turn in 1994 when his wife, Paula, died.

Then in 1997, he met a woman named Virginia, and he married her the following year. Soon after they married, they visited Mt. Olivet Baptist Church near Morgantown for revival services, and Hernandez found himself at the altar that night — the only one there.

He prayed, “Lord, make me strong, don’t let me stop.” They returned for the rest of the revival services, and Hernandez was at the altar every night. It didn’t stop when the revival ended — to this day he still goes and with the same plea, “Lord, help me to not stop witnessing.”

God has been faithful to that request. “A little conversation is all I need … I find a way to give them a sign.” That sign, used in conjunction with a gospel tract, gives him the opportunity to have a gospel conversation. “Spreading the Word, that’s what I am doing. You can go into churches, restaurants, hospitals and banks and you’ll see my signs. People will ask me why I do this. I tell them I want to tell them about the Lord, and let Him take care of the rest of it.” And he has pages and pages of names at his house listing the people who are recipients of his signs.

Virginia died in 2019 — now Hernandez lives with his brother, Alex. And he spends much of his time in one of two large work areas in his house, churning out signs so he can witness to those he meets. Hernandez said all his family members have at least one sign from him, and his goal is to leave a sign “wherever I go.”