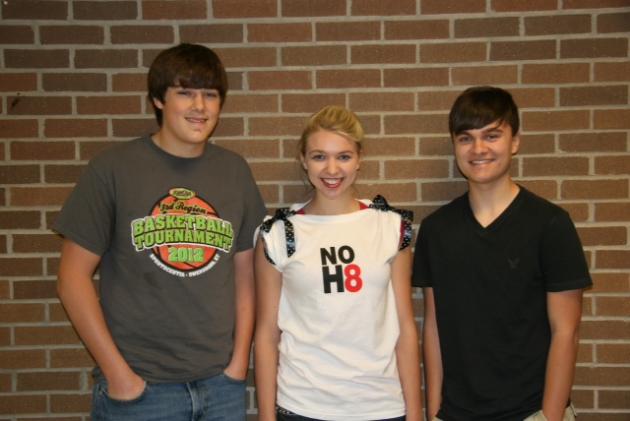 Three Butler County High School students have been accepted to the prestigious Governor's Scholars Program. Juniors Alex Hall, Sierra Fields, and Austin VonAxelson will spend five weeks of their summer living and studying on a college campus with other high school juniors.

The scholars underwent a very rigorous selection process which lasted several months. Students first had to fill out the lengthy application which focuses on academic achievement, extracurricular activities, service to the community, honors and awards, a leadership project, and an essay. Students also needed two letters of recommendation from core content teachers. A committee was formed at the school to review all applications submitted and five applications advanced on to the state-wide competition. Each school is only allowed to submit a certain number of applications to the state based on the junior class population. The Governor's Scholars Program receives nearly 2,000 applications each year and just over 1,000 students get selected.

"We're very proud of the students who were selected to attend GSP. I know that these top-notch students will represent Butler County well," said BCHS Guidance Counselor Rebecca Rose.

Scholars will spend the summer at either Bellarmine University in Louisville, Centre College in Danville, or Murray State in Murray. At each campus, scholars will attend classes Monday-Friday in a focus area, a general studies course, and a seminar. Focus areas range from astronomy to drama to journalism and mass media. During the general studies course, stcholars will often spend time performing community service. The seminar course is designed to stimulate discussion among the scholars.

"It is an honor to be selected to attend this program," said Fields, "I am looking forward to this great experience."

Austin is the son of Belinda and Joe VonAxelson, Sierra is the daughter of Greg and Michelle Fields, and Alex is the son of Brandi and Eric Elms and James and Lindsay Hall.