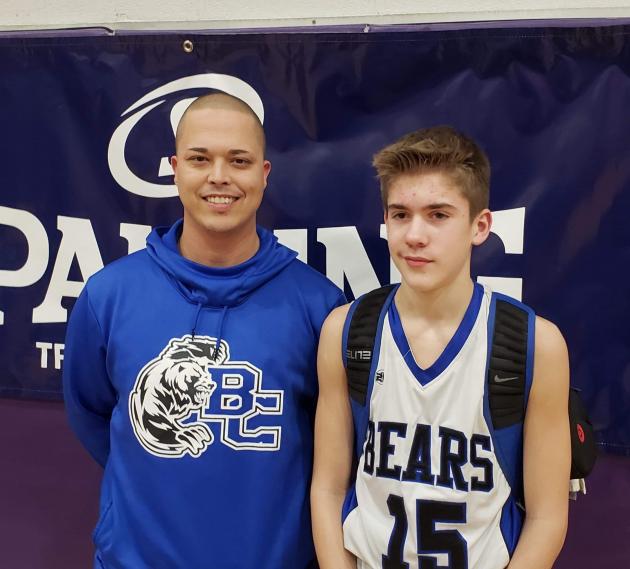 BCMS 7th grade basketball Coach Adam Stovall commented that Briar is a "powerful-minded young man with great drive and strong leadership, love his will to win and improve, has been a pleasure to coach."

Last Saturday, Briar played in two freshman games and then went to Bowling Green Junior High School to play in the East-West 7th Grade All-Star Game.  BCMS Head Coach Dustin Barnett said it had been a pleasure coaching him for the last two years and looked forward to another year.

"His leadership and setting the standard for what we want our program to stand for is second to none. He would much rather make his teammates better than worry about his own stats and that says a tremendous amount about his character," said Barnett.  "I have put a lot of responsibility on Briar and he accepts it with open arms. I wish him nothing but the best in the future and look forward to watching him grow throughout his life, on and off the court."

Briar has been "playing up "since he was three years old, playing soccer. This year he played on the 8th-grade team and the freshman team.  Now that middle school basketball is over, he will continue playing for the freshman team. He has also played for a Louisville AAU Team, the Defenders, with Coach Greg Keown for two years, they played teams from different states, and he was able to keep improving his skills.

This summer, he will attend a five-day skills camp in Tennessee. Many times, when Briar gets home from practice or a game, he will grab a basketball and shoot hoops in the driveway.

All this and he has been a BETA Club Member since elementary school, which is a top priority with his parents.

"I have had the privilege of coaching Briar; his natural talent, along with his sportsmanship, makes him very coachable and a successful athlete. He gives 100 percent during practice and games. He is a team player and a positive role model for his peers," said Johnson.

"His upside is tremendous, and his leadership skills make him unique. "I do not doubt that Briar will achieve his goals and experience the success that comes with hard work and dedication. Beyond a doubt, his future is bright; as a coach, you love having kids with his work ethic," said Dockery.