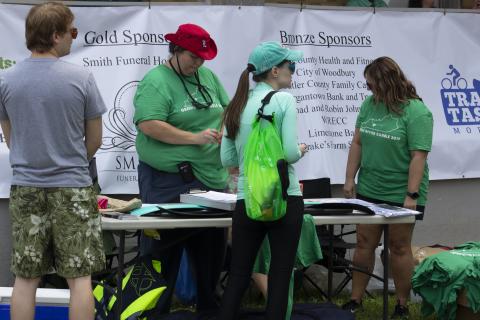 The event was headed by the Morgantown Trail Town Task Force. As this day was also Kentucky’s 227 birthday, Mayor Billy Phelps found this to be fitting considering that this was a day for the community to come together and celebrate the state’s history.

People were invited to bring their canoes and kayaks to float along the Green River through scenic Butler County. Over 30 canoers and kayakers left out early Saturday morning for a nearly 18-mile ride from Reedyville to Woodbury. 59 people traveled the remaining seven miles from Woodbury to Aberdeen, including some who completed the full length.

Local artisans and crafters were also present to showcase their work along with local food vendors.

This event was held in conjunction with the opening of the Green River Museum. The museum, originally known as the office and residence of the superintendent of Green and Barren Rivers, was open for viewing during the event. Green River Museum has been open since 1981 and is where the history of Butler County continues to be preserved.

“We have some projects coming up this summer to help improve the life of the museum,” said Tommy Hines, director of the museum.

The museum will be open every Saturday from 12-4 p.m. throughout the summer and into September. Admission is free.

The Morgantown Shuttle Bus also provided rides for participants and those coming to and from the event. The driver and gas for the bus were originally to be paid for by the trail town task force, however Mayor Billy Phelps said that he wanted to make sure it was covered, given that the day was to be about the community.