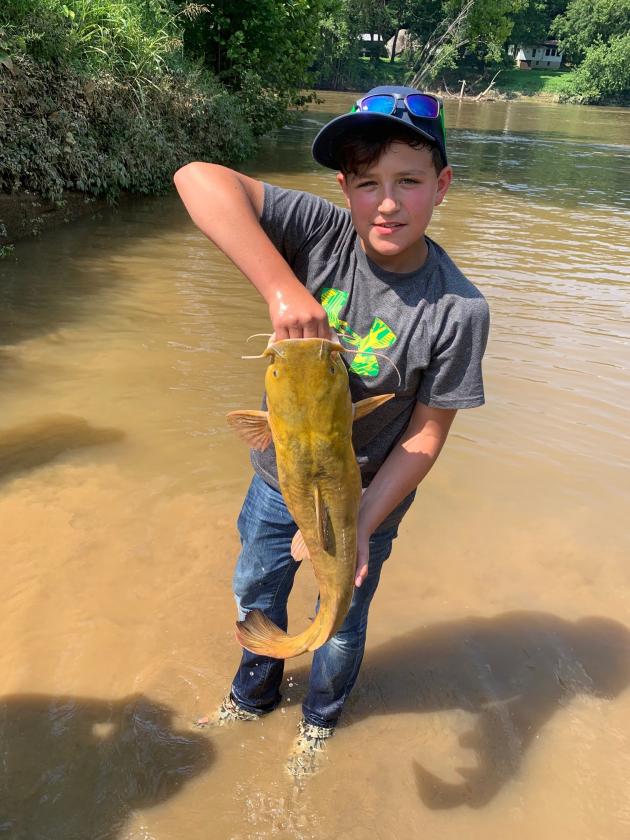 A high river and plenty of current didn’t deter anglers from hitting the Green River on Saturday, morning - June 29 -  as the annual Catfish Festival Fishing Tournament kicked off.

As of mid-afternoon Saturday, five  tagged catfish had been caught.

There are 117 tagged fish in the river and many other prizes are being awarded by Gander Outdoors of Bowling Green for non-tagged catfish that are caught and turned in at the official check station at the boat ramp in Morgantown.

Donald Renfrow snagged a 19.92 pound catfish and was the leading contender for the largest fish of the day.  Jayden Jenkins' catfish was second and Scotty Simmons had a 6.79 lb. fish as well.

Chris Robbins (of Logansport), store manager of Gander Outdoors in Bowling Green, has an RV/camper set-up at the river and is excited about the role his company is playing in fishing tournament.

Robbins said Gander’s support of the fishing tournament and the festival is good way to get people in his store engaged in the Morgantown-Butler County community.  Also, he said its a way to get more people involved in outdoor activities.

“If they have a great experience out here it will turn them on to an outdoor passion, which is what we’re all about (at Gander),” said Robbins.

According to Robbins, Gander Outdoors has about anything a person engaged in outdoor activities would want.

“We have a full RV sales department…over 160 units on site and an indoor and outdoor showroom and then we have a full parks and accessories area,” said Robbins.  “We have a full Gander Outdoors Store inside and we have a full service center.  Our game plan is to give the sportsman, outdoorsman, vacationer, everything they need in one spot.”

Robbins said Gander Outdoors also plans a sportsman's dinner on Monday night at 6 p.m. for all who have purchased tickets or participated in the fishing tournament.

The fishing tournament runs Saturday, June 29 through Monday, July 1, 6 a.m. to 6 p.m. daily.  Daily prizes will be given out each after at 6 p.m. at the boat ramp.