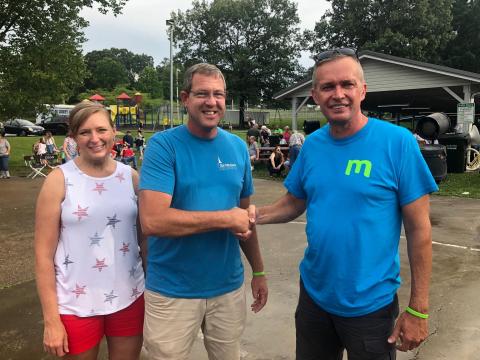 Despite a good amount of rain in the early afternoon hours, the skies finally cleared and the 39th Annual Green River Catfish Festival officially started.  The BCHS Band (led by Jason Ausbrooks) - current members and alumni - kicked things off with the playing of the National Anthem and My Old Kentucky Home.  Catfish Festival Chairperson Robin Johnson welcomed those in attendance.  Reigning beauty pageant winners (from 2018) - Conley Moore, Andrea Deweese, and Kenlea Grubb -  assisted with the drawing of the envelopes for the fishing tournament.

from the City of Morgantown in a drawing among those who purchased fishing tickets.

Bobby Johnson won the largest catfish prize for days two and three of the fishing tournament and won the “entering the river” drawing for all three days.  In total, Johnson won $650, sponsored in part by Gander Outdoors, Essentials Insurance Group and Morgantown Utilities.

Billy Hurd won the drawing for the “biggest loser,” in that his name was drawn among those who did not catch a catfish.  He won $500 from Gander Outdoors.

Below is a list of all fishing tournament winners:

The attempt at the Guinness World Record for the largest paper-wad fight proved successful with over 600 participants.  Festival-goers were also treated to south-central KY’s largest fireworks show set to music and played on WLBQ 101.5.