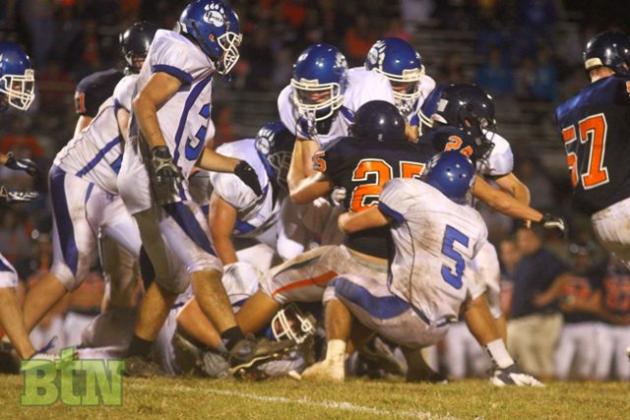 The Bears fell to (4-1) at the hands of the Grayson Co. Cougars by the score of 51-26. Both teams entered the game undefeated, but the Class 5A Cougars running attack was simply too much for the Bears on homecoming night at GCHS.

Grayson Co. scored on its opening drive, in nine plays and took a 7-0 lead with 7:11 in the first quarter of play. Butler Co. responded on their next possession with an eight play drive capped off by a Drake Embry touchdown from ten yards out; the kick was no good; Bears trailed 7-6, with 5:01 in the first quarter of play.
That would be all the scoring the Bears would be allowed as Grayson County's ball control, clock control running game racked up seventeen more points and at the half the Bears trailed 24-6. Grayson Co. kept the Bears offense off the field almost exclusively in the first half of play. The Cougars had the ball for 17:20 of the 24:00 minutes of the first half. The Cougars had 210 yards rushing at the half, most of which came on the legs of Talon Gary, quarterback, and Crain and Logsdon running backs for GCHS.

Grayson Co. responded by pounding the rock, running the football. The Cougars notched two more scores to extend the lead to 44-14 by the 8:44 mark in the fourth quarter of play.  This same methodical game plan as in the first half; kept the Bears offense off the field, and shortened the game and chances. The Cougars time of possession in the second half was 15:20 of the 24:00 minutes of play.