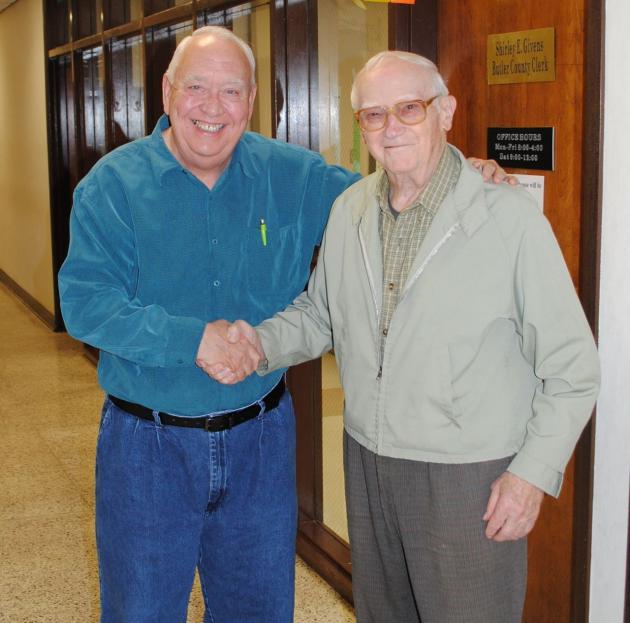 With 13 of 13 precincts reporting, the Republican ticket for statewide offices carried the way in Butler County over their Democratic counterparts in today's General Election.  However, those results were precisely the opposite across the state, save one race, with Democrats garnering a solid majority of votes keeping them firmly in control of state government in Frankfort.

Ironically, in Butler County it was the top of the ticket that had the closest race.  Republicans David Williams and Richie Farmer narrowly edged out Democrats Steve Beshear and Jerry Abramson in the race for governor/lieutenant governor.  The Williams-Farmer ticket received 1,140 votes, while the Beshear-Abramson ticket netted 938 votes, uncharacteristically close considering party affiliation. All other GOP contenders had a higher percentage of the vote in Butler County than did Williams and Farmer.  The Independent ticket of Gatewood Galbraith and Dea Riley received 94 votes in Butler County.

In the only local contest on the ballot, Republican Shawn Johnson defeated Democrat Dale Willis 322 to 228 (58 to 41 percent) in the race for Second District Constable.  Johnson will take over the position previously held by R. L. Jennings, who passed away earlier this year.

Republican James R. Comer, candidate for Commissioner of Agriculture, received the most votes in Butler County, defeating Robert "Bob" Farmer 1,583 to 555.  Comer was the lone Republican to win statewide office.  He did so with approximately 64 percent of the vote across the state.

Republican Crosbie ran a competitive race statewide with approximately 46 percent of the vote.

A dismal voting turnout was reported across the state and that pattern was seen in Butler County with a relatively low percentage of registered voters actually casting votes.

Submitted by Sandy Willis (not verified) on Wed, 09/11/2011 - 7:55am
Great job Dale Willis on your run for 2nd district Constable. We all know you would have served the community proudly! Next time! We love ya Steve - Carol - Pam - Sandy and Tommy Willis