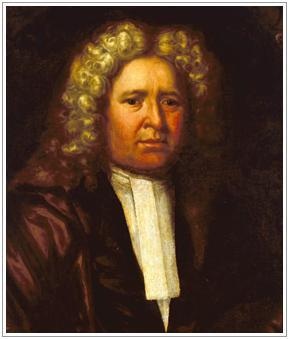 "George W. Eskridge" was the topic of the February History Month meeting of the Green River Chapter NSDAR on President's Day on February 20. Mr. Leon Eskridge, a direct descendant of the 17th Century barrister was the speaker.

Leon compared the circumstances in his own life to that of his ancestor in making the best of a bad situation, turning it around for good and going on to have a fulfilling life and profession.

Leon is a veteran, retired teacher/administrator/coach, farmer, and most of all, a Baptist Minister. He is also husband to Rita Geary Eskridge, a member of the Green River Chapter NSDAR. Leon is a native of Breckinridge County and Rita is native of Ohio County, but has deep Butler County roots. They live in Ohio County.

Col. George Eskridge came from Lancaster, England, who in 1670, at the age of 10 years, was seized in Wales by a press gang who carried him aboard a ship bound for Virginia where he was sold to a planter as an indentured servant for 8 years. When freed, he returned to England to study for a law degree and then came back to northern neck of Virginia between the Potomac and Rappahannock. He settled in Westmoreland County, VA in 1696. He was an eminent lawyer, a member of Quorum and King's Attorneys.

For 30 years from 1705 to 1735 he served with distinction in the House of Burgesses. He was appointed to important committees—Public Claims, Propositions and Grievances, Courts of Justice, Elections and Privileges—and often was selected to prepare bills for the House and convey, in writing, the views of the House to the governor, his Council, or London.

George's plantation of many thousand acres (land grants show 12,644 acres) was called Sandy Point and was located on the historic Potomac River. He played an important part in the life of our first President, George Washington. His [George Washington] mother's name was Mary Ball. Her father referred to her as 'his little rose of Epping Forest’. He died when she was about 3 years old. Her mother also died a few years later and in her will she named George Eskridge as the guardian of Mary. She spent her girlhood in the Eskridge home and later married a neighbor, Augustine Washington. The marriage took place at Sandy Point. When her first child was born, the son was named for Mary's much-loved guardian. Col. George was neighbor and friend to the Washington’s, Lees, and Carters, of Virginia.

George W. Eskridge was a vestryman of Yeocomico Episcopal Church (est. 1655) in Virginia. He was the first Eskridge to come to America.

On Rt. 606 between Kinsale and Tucker Hill Va. Yeocomico Church is the oldest active church in the country. Originally built in 1655 of oak timbers sheathed with clapboards, the church was rebuilt in 1706 with bricks.

Notes from the biography of George Washington:
Colonel George Eskridge, a deputy to the Virginia House of Burgess for many years in the first half of the 18th century, was a guardian to Mary Ball, the mother of George Washington the founder of our country. It is stated that Colonel Eskridge, who died in 1735, came to America about 1670, probably from Lancashire. From a story about George Washington's baptism..."One of these is a certain important gentleman from "down the river", Col. George Eskridge of Sandy Pointe-- he so belongs in the picture. He is a full-faced, dignified man, an eminent lawyer, and of high standing in the community. He long was the faithful guardian of young Mary Ball, now the wife of Augustine, and the mother of the child to be baptized. Much honor is come to him this day."

George Eskridge Washington descended from the Lancaster Ball Family through his mother, Mary Ball. Mary Ball was born in 1708 to Joseph Ball and Mary Montague Johnson. Her father died only a few years after his daughter was born. Mary's mother remarried a man named Richard Hewes. By 1721, when Mary was only thirteen, both her mother and stepfather had died. Colonel George Eskridge, a close family friend was appointed her guardian and Mary lived at his home in Sandy Point, Westmoreland Co. Va. until she married Augustine Washington. Mary met Augustine when she visited her half brother Joseph Ball in Loudon Co. Va. The two were married in 1731 at Sandy Point.

George Eskridge's portrait, together with that of his wife Rebecca Bonum, hung for several years at Mount Vernon plantation but is now in the Department of Archives of the Virginia Historical Society in Richmond, Va. Further reference to George Eskridge is in the Eskridge drawer in the Westmoreland County Museum, Va.--'Cleveland Co. Heritage' pages 218-222.”

Eskridge's elegant dress and impressive wig were expected accoutrements of the emerging gentry of the colony. Unlike many of his contemporaries in England and his successors in Virginia, he is not, however, presented as a haughty aristocrat, but instead is shown to be concerned with other matters. To judge from the contents of his library, those were intellectual and spiritual. Eskridge collected some two dozen books about law, nearly a dozen on world history, and twice that number of religious treatises. The sober, thoughtful reader of those volumes is captured here on canvas. It is little wonder that so capable and solemn a man was the guardian selected by Mary Hewes for her soon-to-be orphaned daughter, Mary Ball, later the mother of George Eskridge Washington. By Eskridge family tradition, Mary Ball named her son out of devotion to George Eskridge.

The following is an Abstract of the will of Col. George Eskridge:
"In the name of God, I, George Eskridge of the county of Westmoreland do make this my Last Will and Testament. Imprimis, I give unto my son Samuel and his heirs forever the house and plantation where I now live containing eight Hundred Acres be the same more or less bounding upon the lands of John Crucher and Robert Ball and a Ditch made by me to divide this land from another tract I have upon the River and from the Ditch to John King's Creek including a parcel of Land I bought from One Rust. Item 1. give unto my son William Eskridge and the heirs of his body Lawfully begotten my tract of Land upon the River adjoining the aforesaid tract given to my son Samuel. Item 1 give to my Loving wife the aforesaid house and plantation and Lands before given to my son Samuel during her natural life- also I give to my said wife all the slaves she brought to me in marriage with their increase and ten other of my slaves during her natural life and after her death. I give the said slaves I had with her in marriage to my Daughter Elizabeth and her heirs forever. I give my land a Machotic commonly called Machotic Quarter in Westmoreland County to my son Robert and his heirs forever. I give unto my four sons of my son George deceased four slaves apiece when they respectively arrive at the age of twenty-one years. I give unto my Daughter Elizabeth and her heirs a tract of land I have at Polrick in Prince William County and all slaves and stock upon the same. I give to my aforesaid son Samuel and his heirs five hundred acres of land part of a tract at a place called Flatlick in Prince William County to be chosen by him in any One place out the said tract. I give to my son-in-law Willoughby Newton and Sarah his wife and theirs Eight hundred acres of land part of the said tract at Flatlick. All the rest of the said tract at Flatlick I give to be equally divided among the children of my son George and the daughter on my daughter Margaret Kenner and their heirs. I give to my wife the use of my Machotic land for five years after my decease. I give unto my son Robert and his heirs all my land at the March in Prince William County upon the condition that he pay all my debts I now owe to any person in Whitehaven in Great Britain. I give to my son Samuel ten negroes. To my son Robert sixteen negroes I mean those at my Machotic Quarter. I give five of the ten slaves hereinbefore given to my wife during her life unto my Daughter Elizabeth, the other five I give unto my son Samuel. I give to my son William and the heirs of his body ten slaves to be annexed to the land hereinbefore given to him. It is the will that my loving wife have the use of all my household stuff during her life and also the use of half of the cattle, hogs and horses upon my several plantations in Westmoreland County during her life. All the rest of my estates after my debts paid I give to be equally divided amongst my children now living. I give unto my son-in-law Howson Kenner and his wife and their heirs eight hundred acres of Land part of My Land at the Marsh before given to Robert which the said Howson is already in possession of and also five hundred acres more of the said Land at the Marsh adjoining to that, the rest I give to my son Robert upon the condition before mentioned. I do hereby revoke all former wills by me and declare this to be my last will. In witness whereof I have hereunto set my hand this 27th day of October 1735. I do appoint my sons Samuel and Robert and my good friend Capt. George Turberville executors of this my will."

(Signed) George Eskridge - Signed published and declared by the said testator, as his last will in presence of us- Edward Barradell, Samuel Cobbs, William Webb.

Westmoreland. At a Court held for the said County the 25th day of November 1735 this last will and testament of Col. George Eskridge, dec'd was presented into Court by Samuel Eskridge, Robert Eskridge and George Turberville, Gent. His executors in the said will named. The said Samuel and Robert made oath thereto and the said Turberville prayed further time to consider thereof and the said will being proved by oath of Edward Barradell, Gent. Who wrote the same and was one of the witnesses also swore that Samuel Cobb and William Webb the other two witnesses subscribed their names thereto in his sight whereupon the said will is admitted to record (William Eskridge the eldest son and heir at law to the said decedent being present and consenting) upon the motion of the said Executors and their performing what is usual in such cases certificate is granted them for obtaining a Probate thereof in due form.

It is of interest that George's son Robert didn't like life in the new world and chose to go back to England even though he wasn't born there.

After the death of his first wife, Rebecca, he married Elizabeth Vaulx, (1700-1744) (daughter of Robert Vaulx and Mary Foxal) in 1716. They had one daughter, Elizabeth Eskridge, born in 1717 in Sandy Point, Westmoreland Co., VA.

Regent Melanie Hunt thanked Leon for his wonderful presentation and presented gifts: a 3x5 U.S. Flag for the veteran and a book entitled WASHINGTON'S CROSSING by David Hackett Fischer for the history lover.

The Green River Chapter NSDAR will celebrate "Women in American History" on Monday, March 19th at 6:00 p.m. at the home of Christine Coleman by studying the life of Martha Washington as the "Indispensable Woman - Martha Washington's Role in the Revolution.”

Submitted by Gordon W. Eskri... (not verified) on Sun, 05/13/2012 - 4:02pm
There was no Col.George W. Eskridge only Col.George Eskridge as per the signatures on many legal documents in Westmorland County records and his own "Will". Birth place and dates are only speculation. Contact Harry Eskridge The Eskridge Family Historian for correct information or read from eskridgefamilyassociation.com