Gaskey picks up win and save in series at EKU 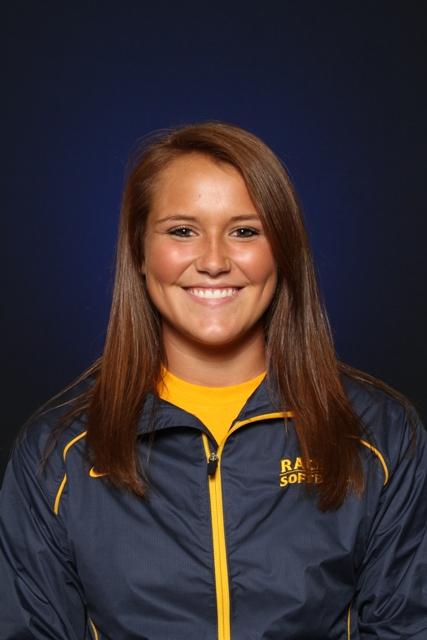 Murray State softball rebounded from trailing 7-3, scoring six unanswered runs, three in the top of the ninth to win 10-7 in nine innings at Eastern Kentucky.

Mo Ramsey put the Racers (31-19, 18-11 OVC) on the scoreboard first in game two as EKU starter Shaylon Robb threw wide of first on the attempt, advancing to third as the ball rolled down the fence into foul territory in the outfield. She scored on a wild pitch, sliding into home as the throw to Robb from the EKU catcher landed in front of the plate.

The Racers added three more on a play that featured a base hit and three errors by Eastern Kentucky. With Sarah Anderson on second and Christian Cox on first, Glosser singled to the pitcher. The second baseman, covering the base, missed the throw, allowing Anderson and Cox to score. The throw to the plate as Cox advanced was missed by the catcher, rolling to the backstop. The missed play at the plate allowed Glosser to advance towards second, and another error by the EKU catcher as the ball sailed into an uncovered center field let Glosser come all the way home to take a 4-0 lead.

Eastern Kentucky broke the game open in the bottom of the third, piecing together six hits with three MSU errors in the inning to take a 7-4 lead after three innings.

MSU grabbed three runs back in the top of the fourth to tie the game a 7-7. Becker flew out to right center for the inning's second out, deep enough to score Glosser from third. Casey Castile followed with a double to right center, scoring Ramsey from second to put the Racers down a run. A shallow single into left field from Kellerman advanced Castile to home as the throw to the plate was too far in front to apply a tag.

The Racers were able to break through in the top of the ninth with runners on the corners as Ellyn Troup dropped a bunt in front of the pitcher with one out. Castile slid underneath a bobbled tag on the squeeze play to put the Racers up 8-7. Two more runs came in to score on a double to the wall in right center by Anderson that increased the MSU advantage to 10-7.

CheyAnne Gaskey pitched a 1-2-3 ninth, her sixth consecutive complete scoreless inning of the game to wrap up the victory.

Gaskey improved to 9-3 on the season, throwing 6.2 scoreless innings after entering in the third inning. She gave up four hits out of the bullpen, walking none and striking out four.

Pittsenbarger falls to 15-14 with the loss, throwing the final five innings for EKU. She gave up three runs on three hits, striking out five and walking one.

Glosser again led the charge on offense, recording hits in four-of-five at bats with a pair of runs. She raised her team-leading batting average to .392 on the season.

Ramsey and Castile each scored twice, and Anderson was the lone Racers to drive in multiple runs with two RBI.

The Racers (32-19, 19-11) got to EKU starting pitcher Hannah Driver in the top of the third, pounding four hard hits off of the right-hander in the inning. Casey Castile gave MSU the game's first run of the day on a deep home run to left center with one out, her team-leading tenth of the year.

Two batters later, Ellyn Troup followed with her own solo shot on a line drive inside the left field foul pole. Her third round-tripper of the season put the Racers up 2-0.

Leslie Bridges and Sarah Anderson followed with singles into the outfield to keep the inning alive, and a full-count walk to Meghan Sims loaded the bases, but the throw to first on a ground ball by Megan Glosser was just in time to get the Colonels out of the inning.

Castile gave the Racers an insurance run in the top of the seventh, hitting her second home run of the day and 11th on the season to left field to put MSU ahead 3-0.

The Racers got all three pitchers involved in the shutout, starting with Shelby Kosmecki. She improved to 12-11 on the season, allowing one hit and a walk with three strikeouts through four innings. Chelsey Sullivan pitched the fifth and sixth, giving up a pair of hits in two innings. CheyAnne Gaskey tossed a perfect seventh, earning her second save on the season.

Murray State out-hit the Colonels 8-3 on the game, led by three hits from Castile. Troup reached four times on the day, recording a pair of hits with a walk and a hit by pitch, and Anderson added a pair of hits.

The Racers end the 2012 Ohio Valley Conference tied for third in the standings with Jacksonville State at 19-11. MSU heads to the OVC Championships seeded fourth as the Gamecocks hold the tiebreaker over the Racers after winning two-of-three games earlier this season.

Murray State and fifth seeded Eastern Kentucky will meet for the fourth time in six days in the first round of the OVC Championships. The winner of Thursday's 12:30 p.m. game will advance to play top seeded UT Martin, with the loser facing the loser of Jacksonville State and Tennessee Tech.