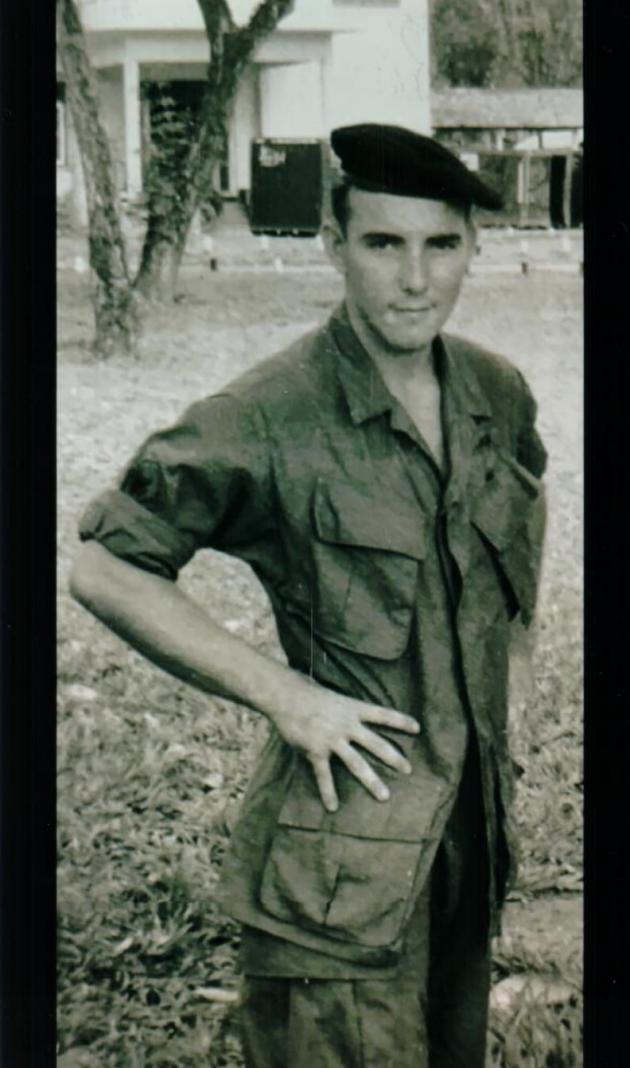 “A true soldier fights, not because of who is in front of him, but because he loves what is behind him. “ G.K. Chesterton. For those who risk their lives to protect our freedom, it is a selfless act of valor that is done without asking anything in return. The brave men and women of the military should always be honored for their sacrifices. This year the Green River Chapter NSDAR is proud to honor Veteran Gary Robbins. His tour of duty started in May of 1968. After completing basic training in Fort Campbell, Kentucky, he was on his way to Ft. Louis, Washington at AIT. They trained for jungle survival, knowing they would soon be headed to Vietnam. Because of his accuracy in shooting ability, Gary was asked to become a sniper for the army but that would mean signing up for a longer tour. Gary was assigned to the 25th Infantry, 1st ND, 27th Battalion, Wolfhounds, Charlie Company, Black Beret. His platoon was assigned to search and rescue missions. On Thanksgiving Day of 1968, they were ambushed in HO BO Woods, which is located in Binh Duong, some 56 km northwest of Saigon. He and one other in his platoon survived. He was awarded the Eagle Fight Medal along with the Purple Heart, Vietnam Service Medal, National Defense Service Medal, Republic of Vietnam Ribbon w/ device, Combat Infantry Badge, Sharpshooter Badge & Rifle Bar, and the Air Medal for Meritorious Achievement while participating in air flight. In basic training, Gary was awarded for Outstanding Achievement in the Physical Combat Proficiency Test by obtaining a score of 493 out of 500, and again, for completing the standard M16 Automatic Rifle Course with a score of 103, the highest in Co. D, First Battalion. After returning to the states, Gary spent his remaining time in Ft. Knox where he transitioned in heavy equipment operations (30 March 1970 to 8 May 1970) to civilian life. When asked about his tour of duty he responded, “You grow up really fast…you had to.” On January 10, 1970, Gary married his beautiful sweetheart, Betty Pendley. They have two sons, Dennis, and Michael, and one wonderful grandson, Jace. In 1984, the Robbins Family completed Hidden Valley Golf Course, a wonderful addition to the quality of life in Morgantown and Butler County. In earlier years Gary and Betty competed in dancing across the United States with the U.C.W.D.C, winning 1st Place in the 2-Step and East Coast Swing, World Championship. They also won 2nd Place in the Waltz and Polka World Championship. For over 50 years Betty and Gary have worked side by side and you can still see the love and respect they have for each other. When asked what gave him much joy in life? He responded, “Spending time with Betty, his sons and Jace.” Oh, one more thing that I bet you would not have guessed, he likes to play a little golf! May God bless you both with much good health and happiness! Page 1 of 2 A soldier is an ordinary and yet an extraordinary human being. A person who offered some of his life’s most vital years in the service of his country, and who sacrificed his ambitions so others would not have to sacrifice theirs. He is a soldier and a savior and a sword against the darkness, and he is nothing more than the finest, greatest testimony on behalf of the finest, greatest nation ever known. So, remember each time you see someone who has served our country, just lean over, and say, “Thank You.” That is all most people need, and in most cases, it will mean more than any medals they could have been awarded or were awarded. On the battlefield the military pledges to leave no soldier behind. As a nation, let it be our pledge that when they return home, we leave no veteran behind.