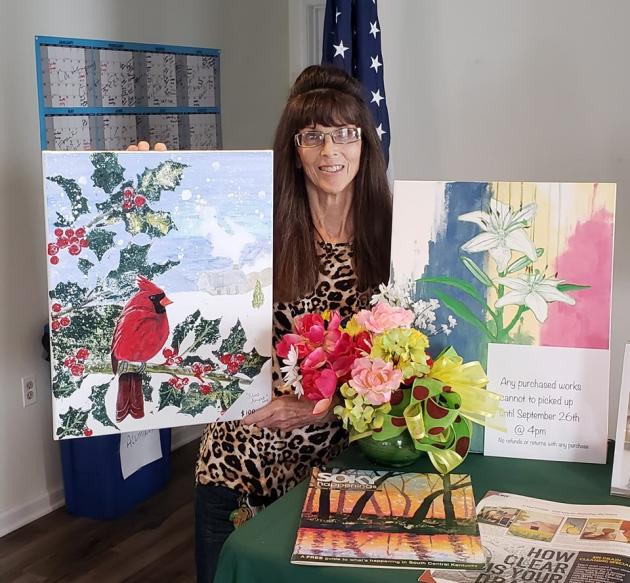 The Butler County Art Guild has been closed for six months because of the pandemic; it only fits that Gail, a passionate artist, displays some of her familiar paintings plus over a dozen she has painted during the shutdown. If you're looking for historical, family, a cardinal, or a peaceful stream, she has it all on display.

Three Saturdays are remaining in September to talk with Gail and listen to her exciting stories of inspiration for each painting. She is there from noon till 4:00 PM.

Gail and her husband Gary grew up in the same Church in New York, but everyone went in different directions after graduation in the early '70s. However, God brought them together almost twenty years later; together, they have raised five children, blessed with ten grandchildren, and have spent a happy thirty-one years of sharing life.

They moved to Morgantown from Broken Arrow, Oklahoma, ten years ago, and the community has been blessed to have them.

Gail started out doing "live paintings "during Church Services around the Christmas Season, and she started getting offers for commissioned artwork. When Andee Rudloff was hired to lead the Morgantown Mural Project across from the Morgantown Bank, Gail and three dozen community members helped. Hundreds of people over the past seven years have used the mural as a photo backdrop. Since then, Gail has taken the lead and painted several murals around town. She is also one of the primary artists working on the mural at the Butler County Extension Office.

Gail and Gary are founding members of the Art Guild located at 115 West Ohio Street, across from the Public Library.

During the week, Gail has been helping Gary and his brother Bill at their company, Factory Ten Composites, where they stay busy, and Gail gets to do a little painting.

Approximately half of the thirty-three paintings on display are for sale, so stop in and meet Gail and enjoy some beautiful local artwork.