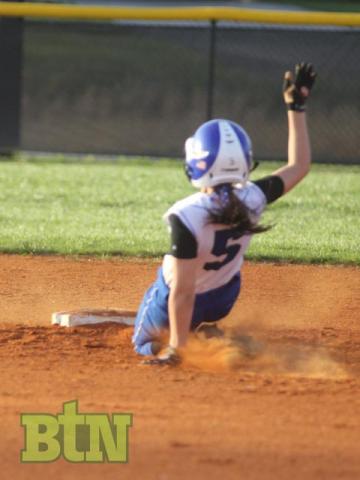 Despite a rough start on Friday night, the Butler County High School freshmen softball team picked up two impressive wins on Saturday to finish strong in the Owensboro Catholic Freshman Tournament held on April 27-28.  The Bears dropped a 7-0 decision on Friday to Catholic before rallying on Saturday for a 1-0 win over Allen County-Scottsville and a 10-0 schellacking of Muhlenberg County.

Butler Pitcher Kassie Phelps allowed three earned runs, struck out one and walked one in five innings of work.

Saturday morning's game proved to be a pitcher's duel that saw Butler County get a clutch hit at the right time to take the 1-0 lead and play solid defense to keep it for the win over a good Allen County-Scottsville team.

Allie Howard grounded out to the shortstop in the fourth inning to score Rich, which proved to be the game-winning run.

Phelps gave up three hits, no runs, struck out three batters, and walked none in five innings.

After scoring just one run in the previous two games (10 innings), Butler County's bats exploded for eight hits in a 10-0, three-inning win over rival Muhlenberg County in its final tournament game on Saturday.

Freshman pitcher Kassie Phelps allowed no runs and no hits in the in three innings.  She struck out one batter.  Saturday's games wrapped up a busy week for Phelps, who reached the 100-inning mark on the season during the tournament.  She also threw just over 600 pitches for the week in nine games.  Phelps has assumed all JV/FR pitching responsibilites following the knee injury suffered by Natoshia White.

"Kassie has done a great job for us, especially during the second half of the season," said BCHS coach John Embry.  "After battling a back strain early on, Kassie has been a workhorse for us down the stretch in freshman and JV games and has shown steady improvement."

"We had a terrible game on Friday but I love how our girls responded on Saturday with two good wins over good teams," said Embry.  "They showed a lot of guts in the way they battled in those two games."