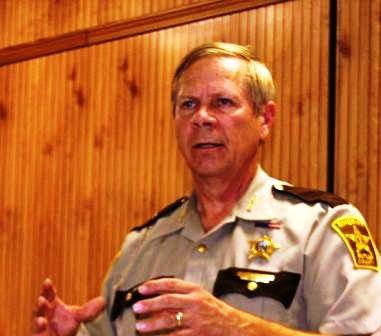 An audit that has lasted over an year and has cost the county over $46,000 recommends that former Sheriff Joe Gaddie transfer $9,604 due the 2010 fee account from the tax accounts, deposit $3,570 in personal funds to cover undeposited receipts and disallowed expenditures, and then pay the additional excess fees of $13,174 to the fiscal court. Auditors have billed the county for 904.5 hours, a total of $46,628.57 for Gaddie's audit.

According to Gaddie, a former employee, who he did not identify, is repsonsible for taking the funds.  The employee was fired in 2010 for other reasons.  Gaddie, a former KSP detective who served one term as sheriff, said he knew nothing about the missing money until contacted by auditors.

The report of the Audit of the Butler County Sheriff for the year ended December 31, 2009, cited that the Sheriff’s office lacked adequate segregation of duties. The report suggested the following compensating controls to offset the lack of segregation of duties:  the Sheriff or designee should on a regular basis compare the daily bank deposit to the receipts ledger, should compare checks written to the disbursements ledger, and reconcile the monthly and quarterly financial report to the ledgers.

The same problem surfaced again in the 2010 audit. Findings included:

* Appropriate and accurate accounting records were not maintained.

* Receipts were not deposited intact on a daily basis.

* All receipts collected were not recorded.

* Receipts forms were not issued for all receipts collected.

* Receipts were deposited to the wrong bank accounts.

* Proper documentation was not maintained for all disbursements.

* Invoices were not paid within thirty days.

The former Sheriff’s office should have maintained appropriate and accurate accounting records. The former Sheriff did not maintain accurate records for the fee account, and deposited 2010 fee receipts to the 2009 tax account and payroll.

The former Sheriff’s Office should have deposited receipts of the office, intact, on a daily basis and recorded all receipts collected.

* $885 of 2010 receipts collected for auto inspections, CCDW permits, serving papers, and reimbursements of supplies were not deposited to the 2010 fee account

* From  January 1, 2010, through September 13, 2010, deposits were not made intact daily, all receipts collected were not recorded, and undeposited receipts were noted.

The former Sheriff’s office should have issued receipts forms for all receipts collected.

Deposits were found to include payments received where the receipt form was not issued and receipt forms were found that were issued but not included in the daily cash check-out sheet batched totals.

The former Sheriff had disallowed expenditures of $2,685 in the fee account.

* $2,020 for guns purchased for the personal use of employees of the former Sheriff’s office

The former Sheriff  had a deficit of $3,570 in his official 2010 fee account. The deficit was due to undeposited receipts of $885, and the disallowed expenditures of $2,685. This matter is being referred to the Office of the Attorney General for further investigation.

According to former Sheriff Joe Gaddie he has spoken with the auditors and they have proof the money was taken by a former employee.

“I am glad this is under investigation, I didn’t know anything about this until I was contacted by the auditors,” said Gaddie.

“I fired the employee in question for insubordination and inefficiency in September of 2010.  I find myself in this tribulation as the result of hiring a secretary that turned out to be a ravenous wolf in sheep’s clothing,” added Gaddie.

“I think the scripture that best fits this situation is Romans 7:21 I find then a law, that, when I would do good, evil is present with me,” said Gaddie.


Audit reports can be found at www.auditor.ky.gov.