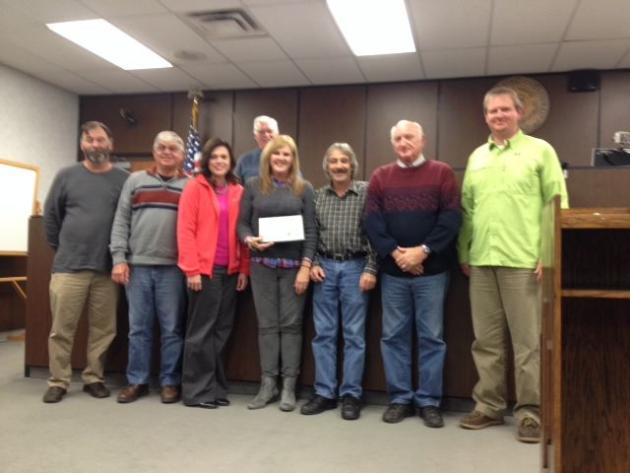 The Butler County Fiscal Court faced a short agenda for their regular December meeting on Monday, December 9th, 2013. However, the meeting tuned into a 90-minute affair, with some contentious moments between magistrates and visitors.

Rhonda Vaughn and Tiffany Wilson visited the meeting to present a certificate to the court on behalf of the Butler County Drug Free Community Coalition and the Barren River District Health Department. The certificate recognized the Fiscal Court for their actions earlier this autumn to make the Butler County Courthouse a tobacco-free facility.

Next the squires approved a new FEMA flood plain map for Butler County. County Attorney Dick Deye told the court that County Surveyor Cody Henderson told him that the county needed to adopt the new map in order for Butler Countians to be eligible for federal flood insurance. According to Deye, the last floodplain update was done in 1994, and adoption of the new plan would also automatically accept any subsequent updates. The magistrates adopted the new floodplain map with a 5-0 vote. Judge-Executive David Fields said Monday night's actions constituted the first reading of the flood plain ordinance. Because the new flood plain map needs to be adopted by January 8th, a called meeting will be required to meet the deadline.

The ongoing plan to move the Butler County Ambulance Service to the former Pizza Zone location took another step forward on Monday night. Magistrates voted 5-0 to authorize Judge Fields to sign a lease agreement between the county, city of Morgantown, and the Butler County Ambulance Board. Board member Mark Hood spoke to the Court and explained that the lease costs $1 per year, with the county responsible for utilities, upkeep, maintenance, and insurance.

A lengthy, sometimes technical discussion concerning the McKendree Chapel bridge project was next in the meeting. Judge Fields presented the magistrates with three bids for construction of the bridge. Scott & Murphy had the low bid, but questions ensued about the omission of piling installation in their bid.

Chris Proffitt, representing Scott & Murphy, told the court that they omitted piling costs because they were under the impression that a bedrock foundation was present at the bridge site. He further stated that if pilings were needed they could be added to the job on a cost-plus basis, meaning additional costs to the county. Judge Fields and Fifth District Magistrate Keith Daugherty both raised concerns that operating with a cost-plus plan in place could run the project over budget. That led to discussions about whether or not Scott & Murphy actually had the lowest bid.

County Road Supervisor Timmy West told Proffitt that his crew had driven a 16-foot steel pin into the ground at the site, but didn't strike rock. After some discussion, Proffitt suggested that the court table the matter until excavation could be done at the site to determine if pilings would need to be used. County Attorney Deye suggested that all the bidders be informed of the additional delay on awarding the bid, and any changes that might arise. The court voted 5-0 to table the matter until further site evaluation could be completed.

The court next moved to fill two vacancies on the Butler County Extension Agency Board. Greg Woodcock and Tammy Alford were approved by a 5-0 vote to fill seats vacated by the departure of Darrell Deweese and Mary-Jo Abbott.

By another 5-0 vote, magistrates approved the annual allotment for the a Green River Museum. The court gives $2,500 to the Museum in Woodbury. The December meeting of the court is traditionally held at the museum, but weather concerns forced cancellation of the special meeting this year.

Butler County Sheriff Scotty Ward was next to address the Court, as he presented his budget for 2014. Ward presented his budget, totaling $542,998.23, and explained some small differences between last year's and this year's figures. The 2014 budget has a slightly higher county contribution than the present budget by $3,942.40. Ward said his only increase was the 2% wage increase given to all county employees. The sheriff said he calculated his 2% increase as a percentage of his total budget to save the county money. He said the increase worked out to 19-cents per hour per employee. The department had a $7,100 decrease in other funding because of the loss of the highway safety grant. Ward explained that the grant provided overtime for traffic control.

Fourth District Magistrate David Whittinghill questioned Ward about increases to the Fiscal Court contribution to the sheriff's budget during his term in office.

"Why has it went up so much?" asked Whittinghill.

"I can explain every bit of that," countered Sheriff Ward.

Ward explained that he took office in 2011, and as a first-term sheriff had no experience in writing a budget. He said he took over animal control after discussing the matter with Judge Fields. The sheriff's office received $15,000 annually for animal control, and the court in turn agreed to budget $4,000 per year, for four years to enable the sheriff to purchase three new vehicles. The sheriff added the $4,000 to outgoing Sheriff Joe Gaddie's budget to arrive at his first budget figure. No pay raises were budgeted, nor were any increases for fuel and other expenses.

The sheriff said he asked for a budget increase in 2012, and directly addressing Whittinghill said, "that you agreed to." Ward said that other county employees had received raises totaling 10% in budgets leading up to 2012. At that time Ward asked for and received an 8% pay increase for his employees.

"I don't think my people are any better, but they're not any worse, they deserve the same, and that's why y'all agreed to give me that," said Ward. He further stated that in 2013 he asked for, and received a 2% raise for his employees, totaling $3,000.

"All I've ever done on my budget is ask for the same thing that all the rest of the county employees got," said the sheriff.

He stated that other increases came from higher fuel costs. Ward said that he used Sheriff Gaddie's fuel budget figure of $26,000 in his 2011 budget, but spent in excess of $36,000.

Whittinghill then questioned Ward if he had borrowed $35,000 from the state in 2011. Ward confirmed that he had. Whittinghill then stated that the Fiscal Court had amended its 2012 budget to give $22,000 to the Sheriff's Office to help repay the loan, and that the money stayed in the budget the following year.

"The next year it never did drop down none," said Whittinghill, "it should have dropped it twenty-two thousand."

Again, directly addressing Whittinghill, Ward stated, "You ain't even close on that figure."

Judge Fields reminded the court that Ward had reimbursed the $22,000 back to the county.

The sheriff then gave a comparison to the Fiscal Court between the activities of the Sheriff's Office between 2010 and 2013. According to Ward, three KSP Troopers were working in the county in 2010, compared to one Trooper working part-time in Butler County today.

"My guys answer 99% of every call that comes through this county," said Ward. "We work 99% of every wreck that happens in this county," he said. Ward also explained that in 2010, in addition to three KSP Troopers, there were four deputy sheriffs. Ward said he has five deputies and a K-9, but is now in charge of providing a School Resource Officer (SRO), handles Housing Authority patrols, and does animal control.

Ward's remarks drew a round of spontaneous applause from the large crowd of visitors at the meeting.

Magistrate Keith Daugherty expressed concerns that if the Fiscal Court's portion of the sheriff's office budget continues to increase that it could reach $250,000 by 2018. Daugherty said he doesn't know if the county will be prepared to meet that need. Ward said his budget will only go up if the Fiscal Court continues to give 2% raises to employees.

Ward told Daugherty that the Fiscal Court could take back the $4,000 vehicle budget in 2015. He also suggested that if he is reelected he would take an annual 2% budget cut over four years if his office was allowed to keep its excess fees.

Judge Fields said he would support that measure, but told the court he didn't think it was allowed under Kentucky law.

A vote was then called on the sheriff's budget, with the motion passing 5-0.

Givens also presented her annual setting the maximum amount for deputy's salaries. The salaries increased by $7,000 for 2014. The motion passed 5-0.

County Road Supervisor Timmy West gave his final report for 2013. He told the court that mowing and chip-sealing are finished for the season. He said his crews continue to operate slope-mowers, and that 80% of roads had been cut back since the new mower was purchased. According to West, by the end of next year the entire county road system will have been cut back. After that, crews will be able to completely cut one side of the county every other year.

West and Judge Fields both said that cutting efforts with the slope-mower helped minimize road problems last week during the icy weather.

West said that his crews are currently down one tractor and ditcher, and that the wetter than normal fall meant more problems with ditches and tiles. West said ditching operations will continue and should be caught up soon.

West closed his remarks by saying that he would like the county to consider hiring a lead ferry operator to oversee operations at both county ferries. West said a five-person crew currently runs the ferries. Each ferry has two operators and one relief operator serves both ferries. West would like a lead operator to help with relief duties and other responsibilities.

Citizen Robert Cron was the last person to address the Court on Monday night. Cron opened his remarks by saying that lack of proper leash laws had contributed to a situation involving him over the last two years. Cron was alluding to his alleged shooting of his neighbor's dog after it had destroyed his property in 2011.

Cron said he told the court in 2011 about dog problems in his area of the county. Cron alleges that Judge Fields said there was nothing the county could do about the dogs.

According to Cron, the same dog is causing him problems again. Cron said he was asking again for something to be done, and reminded magistrates that he had provided a packet of leash laws from other counties to them at the court's September meeting.

Cron told the court that the sheriff is given $15,000 per year for animal control, but has nothing to enforce.

"I've asked before and I'm asking again that you develop some laws, some rules, some standard operating procedures, for the sheriff for the animal control part of that to enforce," said Cron.

Cron then asked the magistrates what they were going to do, singling out David Whittinghill and Keith Daugherty by name.

"What am I supposed to do," asked Cron. "I'm not going through the same thing I did three years ago, I'll tell you that. You people need to do this," he continued. Cron said that animals are running loose, doing damage, and causing private citizens to take matters into their own hands.

Cron again pressed the magistrates for a response to his request. "What are you going to do? Are you going to address this or are you just going to ignore it?"

After pausing momentarily Cron continued. "I'm waiting for an answer." When no response was immediately given Cron closed his remarks by stating, "You're not going to do anything, is that it? That's pretty sorry, pretty sorry."

With no further items on the agenda the meeting was adjourned.