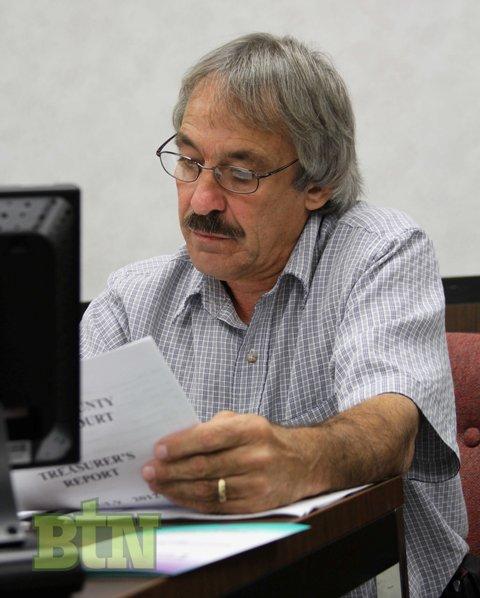 The Butler County Fiscal Court held its regular meeting for October on Monday with all members present. A full agenda awaited the court.

Judge Fields reported that Ohio County would assume half the repair costs of the building, with the total cost to both counties not to exceed $4,000. The building needs guttering, electrical wiring brought to code, and new windows. The original motion was brought back before the magistrates and passed by a 5-0 vote.

The magistrates next approved the annual contract with Propane Energy Partners for propane service to the Woodbury Museum. Judge Fields reported that PEP is the only bidder and this is an annual contract approval. The item passed 5-0.

Next the court discussed painting and other repairs to the courthouse. Judge Fields reported that a bid sheet would need to be prepared for prep, painting, and possibly painting of window sills and other surfaces. Fields reported that the main front doors of the courthouse would need to be replaced, and that the new doors would have to be more handicapped accessible than the current doors. Fields also told the court that because there is a partnership between the Administrative Office of the Court and the county that the AOC would assume part of the cost. No action was taken on either measure.

Next the court took up discussion of the cleaning contract for the courthouse. Seven total bids were received. David Whittinghill made a motion to accept the bid from Teresa Forshee at $25,480, with Keith Daugherty seconding. A roll call vote ended with three votes against the bid, from Stevie Givens, Chad Tyree, and Second District Magistrate Johnny Tuck. Whittinghill and Daugherty voted for the measure, but it failed 2-3.

Johnny Tuck made the motion to accept the $24,000 bid from Shirley Neighbors. Stevie Givens seconded the motion and it passed by a 5-0 vote.

Road Supervisor Timmy West asked the court to approve the purchase of a three-point hitch blower that will be used with current county tractors. West said the cost will be $5,775. According to West the blower would aid in keeping ditches free of leaves and will also save on gravel costs by removing leaves and other organics from road surfaces while saving the gravel. West said that if the blower saves 5% on gravel costs that the blower would pay for itself. The court approved the purchase by a 5-0 vote.

An agreement and resolution were passed by a pair of 5-0 votes to resurface and patch roads with $288,925 from Rural Secondary Road (FLEX) Funds.

Three road additions dominated the next portion of the meeting. Eric Young Road is ready to be taken onto county maintenance pending approval of a committee set by Judge Fields consisting of Road Supervisor Timmy West, Chad Tyree, and Stevie Givens. The Smith Home Cemetery Road will be extended 383 feet after a 116 foot section is taken off the county list. This is being done at the request of the cemetery committee in order to make the road a loop and alleviate traffic problems. A committee consisting of David Whittinghill, Johnny Tuck, and Timmy West will have to inspect the road. Finally, Hana’s Lane off of Mitchell’s Drive will be added to the county road list pending inspection. The committee to inspect will be Keith Daugherty, Johnny Tuck, and Timmy West. A hearing for all the roads will be Tuesday, November 13th at 5:30 p.m. in the Judge’s office.

The court next entered into a brief closed session to hire an operator for the Rochester Ferry and a relief operator for both ferries. When the magistrates returned to open session Leo Ferrell was hired at the maritime pay rate and will assume the duties effective October 9th. Jerry Mellor was hired as the new relief ferry operator and will begin training on October 15th. His pay rate will be $10.50 per hour.

Chad Tyree turned in a bid sheet for repairs on the Rochester Ferry tug. Tyree was told that the winning bidder would be responsible for transporting the ferry tug. Judge Fields told the court that the current spare tug would have to be readied to put into service. The court set the bid deadline for ferry tug repairs for November 2nd.

At Chad Tyree’s request a work session to work on job descriptions and duties for county employees was set for October 22nd at 5:30 in the downstairs court chambers.

In other business the court approved a $200 insurance reimbursement to the 2nd District Fire Department, approved routine bills and transfers, accepted the treasurer’s monthly report, and approved transfer of up to $45,000.00 from the General Fund to the Jail Fund.

The meeting was then adjourned.

The November meeting of the court will be moved to Tuesday, November 13th because of the Veteran’s day observance falling on Monday the 12th. Any person or group wishing to be on the agenda for the meeting must inform the Judge’s secretary by Friday, November 9th at 4:00 pm.