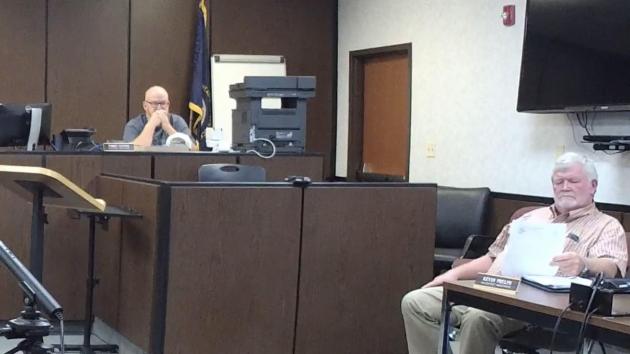 It took two meetings and a little drama but in the end an $84,548 Kentucky Pride grant for the Butler County Recycling Center was turned down by magistrates on a 3-2 vote.

The initial meeting in which the grant was discussed was on Monday, June 22.   In an unusual move, Fourth District Magistrate David Whittinghill asked Judge-Executive Tim Flener to vote on a motion to approve a Recycling Grant Agreement for $84,548.000.

The Recycling and Household Hazardous Waste (HHW) Management Grants Program was established in 2006 by Senate Bill 50, effective July 12, 2006, and incorporated as a part of the Kentucky pride fund. KRS 224.43-505(2) (c) specifies the establishment of recycling and Household Hazardous Waste (HHW) management grant programs. A 25% match is required, which the county does with an in-kind match from volunteer work at the Recycling Center. The grant is for the purchase of a 906M Wheeler Loader $77,548.00 and advertisement.

Magistrates David Whittinghill and Stevie Givens, along with Judge Flener, voted to accept the grant. Magistrates Kevin Phelps, Dillion Bryant, and Timmy Givens voted no, resulting in a 3-3 tie and no action taken. This prompted a called meeting for Friday.

When asked on Monday about their “no” vote, Timmy Givens had no comment;  Phelps and Bryant said they did not think the piece of equipment requested was needed at the recycling center.

The called meeting on Friday was held to address the grant once again.  At Friday’s meeting, Judge Flener was not asked to vote this time and the motion to accept the recycling grant failed on a 3-2 vote.  Magistrates Phelps, Bryant and Timmy Givens voted against accepting the grant; Stevie Givens and David Whittinghill voted in favor of the measure.

Judge Tim Flener asked that the magistrate come up with a plan on how they want the recycling center to function by the next meeting.

Meanwhile at Monday’s meeting, the court voted 4-1 to buy the Butler County Coroner a van at the cost of $26,527. Butler County Coroner Marty Jones has been using the Jones Funeral Chapel equipment for years for the coroner's business. The court has reimbursed him for mileage. Magistrate Timmy Givens suggested the court purchase a used van since they purchased a used van for the Animal Shelter. Givens voted no to the purchase of a new van.  Magistrates Bryant, Whittinghill, Phelps, and Stevie Givens voted in favor of the purchase.

Emergency Management Director Charlie Tomes requested $560 for a spray-on standard box bed from EM Line X for his vehicle. According to Judge Flener, a mat could not be found to fit the truck bed. Magistrate Timmy Givens voted nay; all other magistrates voted yes.

In other business, the court approved the Commonwealth of Kentucky and Butler County Fiscal Court for reimbursement ($438,481) of expenses incurred during the COVID-19 pandemic. It was also known as the Care Act, giving Judge Tim Flener authorization to sign MOA.

The court approved the adoption of the fiscal year 2021 authorizing and designation of IDA Resolution between Butler County Fiscal Court to receive TVA funds under the Regional Development Agency Assistance Program and to give Judge Tim Flener the authority to sign.

-2nd reading of the Administrative Code and Personnel Policy