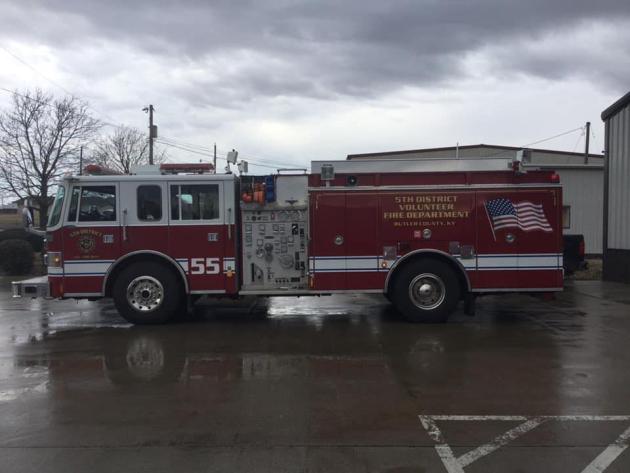 The Fifth District VFD was notified in August that they had been awarded an AFG grant for $70,456.91. The Assistance to Firefighters Grant (AFG) program's purpose is to protect the public and fire fighting personnel's health and safety against fire-related hazards.  Fifth District VFD will be able to purchase six new SCBA units. An SCBA (Self-Contained Breathing Apparatus) is a critical component in the personal protective equipment used by firefighters.

The Fifth District VFD can purchase seven sets of turnout gear with this grant. A set includes boots, pants, a coat, gloves, a helmet, and a hood. Turnout gear is made of fire-resistant fabric, enabling a firefighter to more safely fight a fire and put a protective barrier between them and harm.

Firefighters can not always see the hazardous contaminants exposed on a fire scene and during overhaul. SCBAs and turnout gear provide the highest level of protection for a firefighter. Firefighters can take breaths safely and have a protective barrier while entering a burning structure to perform rescues, locate and suppress the fire and prevent further property damage.

Fifth District VFD has been fortunate enough to receive over $200,000 worth of grants within the last three years. Chief Richard Henderson has been instrumental in finding and applying for grants that benefit our community and fire station. These grants not only help our firefighters stay safe but enables them to be better equipped to help the citizens of Butler County and surrounding counties when needed.

The firefighters stay busy throughout the year, not only responding to numerous emergency response calls but also training to improve their skills as a firefighter. In addition, they do fundraising to help purchase equipment and safety gear. Firefighters also are involved in the community, such as handing out candy at the fire department to children on Halloween, Safety Day at the Chalk Festival, participating in the annual Christmas parade, and visiting the schools to talk about fire safety.

A few things scheduled for the year are: 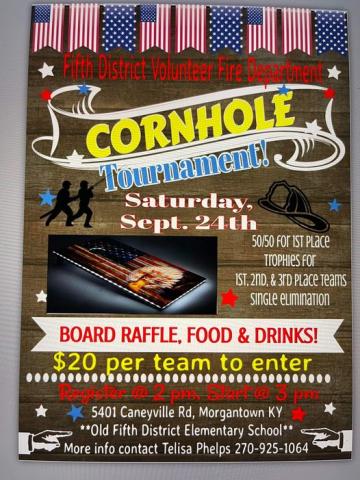 On September 24, we will have a Corn Hole tournament fundraiser at the old Fifth District Elementry School, 5401 Caneyville Rd, Morgantown. Registration starts at 2 pm. Pork BBQ, hamburgers, and hot dog plates will be served during the tournament. In addition, a winner will be drawn from the raffle tickets sold for a set of regulation-size corn hole boards with LED lights. Contact any firefighter or board member for information or to purchase raffle tickets. You may also contact Telisa Phelps at 270-925-1064 for tournament information or raffle tickets.

October 1 is our re-scheduled roadside clean-up day. The Fiscal Court offers this annual event to non-profits who apply. The fire department can earn up to $600 while helping keep our community roadsides clean and beautiful.

October 22 will be our annual training Blitz. All area fire departments are invited to attend. This is a great way to ensure you have your certification up to date before the end of the year and for new firefighters to get several hours of required certification training at once.

November 25 until Christmas day, Myron Dockery will once again display his amazing Christmas Lights Show located at 93 Lonnie Snodgrass Road. The show lasts approximately 20 minutes and is set to music that can be heard through your car radio. The show is free, but Mr. Dockery always asks if you would like to donate to please make it to the Fifth District Fire Department. There may be a special visit from Santa one night for those that believe.

Firefighters from Fifth District Volunteer Fire Department have responded to 69 runs throughout the county this year. We have 24 firefighters, three of which are junior firefighters (16-18 years old). Our central station is located at 6810 Caneyville Road. We also have a sub-station at 63 Holston Hollow Road, beside the Gilstrap Community Center. The sub-station can be toured at the Gilstrap Community Center Pie Supper on October 15, starting at 4 pm.

To become a certified firefighter, you must have 150 hours of training(same as paid firefighters). Volunteer firefighters donate their time to become certified and respond to emergency calls. They do this because they love their community and the desire to serve. Anyone interested in training to become a firefighter, please get in touch with Chief Richard Henderson at 270-999-5804 or attend the monthly firefighter meeting on the third Tuesday of each month at 7 pm. The next meeting will be on September 20.