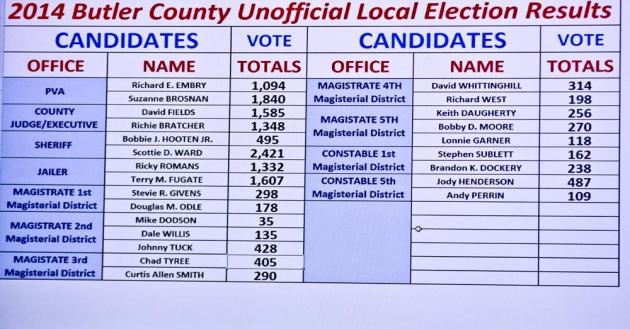 The most anticipated races were arguably for the four countywide offices of judge-executive, sheriff, jailer, and PVA. Judge-Executive David Fields fended off a challenge fromRichie Bratcher.  Fields garnered 1,585 votes (54%) to Bratcher's 1,348 votes (45.9%).  Fields, a Republican, will face Independent candidate Joey Franzell in the November General Election.

Sheriff Scottie Ward cruised to victory with 83% of the vote in his race against challenger Bobbie Hooten.  Ward received 2,421 votes to Hooten's 495 votes.

The statewide race for United States Senate saw predictable results in Butler County.  Republican incumbent Mitch McConnell received 57.4% of the vote (1,647) to defeat Matt Bevin, who got 1,076 votes, or 37.5%.

Democrat Alison Lundergan Grimes, who is the Kentucky Secretary of State, received 257 votes in the county (82.3%) to easily outdistance her opponents.  Republican McConnell and Democrat Grimes will square off in the November General Election.