The Feminine Face of Farming 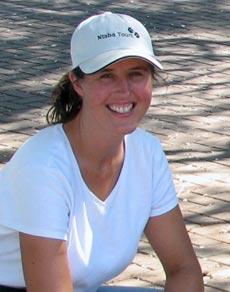 The 5th annual Bluegrass Local Food Summit is being held March 22-24, 2012, a month also set aside as a time to celebrate women’s contribution to history. In addition to rebuilding and celebrating a local food system, this Summit provides Kentucky residents an opportunity to acknowledge the increased visibility of women farmers in our region.

History has not treated women agrarians kindly.  Think of the impact that Grant Woods’ American Gothic painting, in which the models were Woods’ dentist and his sister, had on the perception of women farmers.  Or Julien Dupre’s milkmaids struggling to bring a hard-headed cow in from the field or lifting bales of hay.

We tend to forget that women led the earliest discoveries of domestication, cultivation and management of crops, which became the basis for modern human civilization.  Native American women selected the pumpkins, squash, beans and corn seed, in effect, becoming the first agrarians in North America. When farms were more sustainable in the Colonial period, women were considered partners, i.e., “good wives,” who were expected to maintain equal status with their partners by rearing small-animal livestock, goats, gardens, bees, and chickens.

As the United States switched to more specialized monocultural trends in the nineteenth century, labor expectations changed accordingly but women were still necessary partners as settlers exercised the Homestead Act, and enslaved African women worked in the fields.  In the latter part of the nineteenth century, as farms were either abandoned for lack of labor or mismanagement, women increasingly began to seek more secure employment in factories or other branches of employment in the medical/journalism/education fields.

During WWI, some women anchored the family farms or chose to explore unconventional agriculture such as bee keeping since government subsidies and rationing made agriculture a profitable enterprise.  Women also began to work in agricultural teams such as queen production crews or harvesting berries and vegetables on the migratory “circuit” in California. Asian and Latino women worked long hours for little pay alongside the men picking grapes, tomatoes, sugar beets and other cash crops.

Women were also sounding the cautionary voices of moderation in pesticide use. Entomologists Anna Botsford Comstock and Marian Patch were the clarions, but their efforts were overshadowed by the Great Depression, food rationing during WWII, and the immediate return to large-scale agriculture use in the 1950s and 1960s.

In 1962, Rachel Carson, a prominent scientist and naturalist, published Silent Spring, chronicling the effects of DDT and other pesticides on the environment. Silent Spring is widely considered as being a key factor in the US government's 1972 banning of DDT and launching the worldwide environmental and organic agriculture movement. Kathleen Merrigan, director of the Food and Environment Program at Tufts University in Boston, helped shape the legislation that led to the USDA National Organic Program.

The average age of farmers in the United States is over 50 years old, and going up, so the interest of young farmers must be encouraged if healthy farms are of value to our communities. The next generation is likely to include many women, both citizens and recent immigrants, whose inclinations and beliefs will alter the face of farming and food production. The 2007 USDA reports that at least 30.2 percent of farmers were women.  The data suggests that many of these women will opt for organic farming, working to decrease our dependence on environmental toxins and on a food system that dominates nature rather than working in tandem with it.  Far from seeming dour and bitter, these women, to quote a bumper sticker for Kentucky Women in Agriculture, “make dirt look good.”

The Bluegrass Local Food Summit held at the Crestwood Christian Church will feature many women speakers and will give special recognition to Kentucky Women in Agriculture, Inc. Kentucky residents will have three days of opportunities to share and develop common understandings about the links between food, health, the environment, and local economies. Farmers, statewide government and business leadership, educators, chefs, faith members, community activists, youth and all concerned citizens are encouraged to participate. The Summit’s purpose is to promote the health and well-being of children, families, farms, local economies and the environment by increasing access to locally grown and processed food in schools, hospitals, restaurants, institutions, groceries, food pantries and by supporting food and garden-based education in Kentucky.  Registration is $45.00 for each day of attendance.

The Summit activities sponsored by many community partners will conclude on Tuesday, March 27 at 6pm, with the free film showing of Farmageddon at the downtown Central Public Library Theater in partnership with Good Foods Market and Café. For more information on the Summit, contact Sustainable Communities Network at (859) 270-3699,  http://sustainlex.org or embryjim@gmail.com.