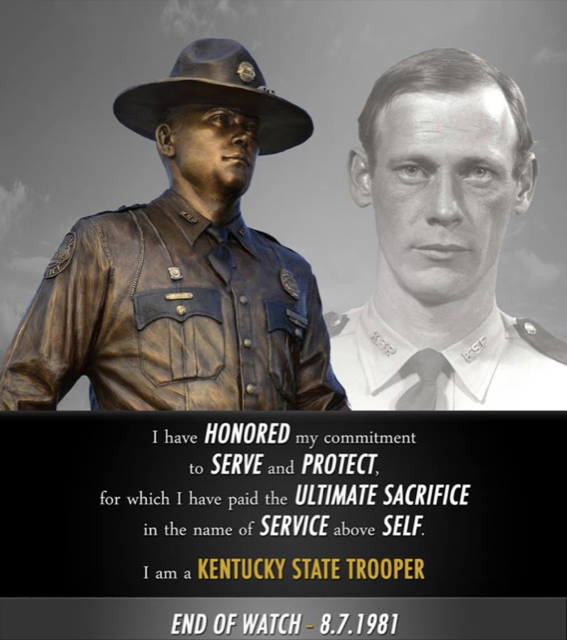 By sharing my story, I want to honor the memory of my daddy, not to cause arguments or spark debate.

Friday, August 7, 2020 was the anniversary of my daddy’s death.  Kentucky State Police Detective Darrell “Vendl” Phelps, was a husband, daddy, son, brother, a friend to many and an honorable man.  His end of watch was August 7, 1981.  The Bible says this:  “Greater love hath no man than this, that a man lay down his life for his friends” --John 15:13.  Daddy loved his family and he loved the people that he took an oath to serve and protect when he became a KSP Trooper in 1969.  Daddy was an honest police officer and a respectable man, not just to his family, but from what people who knew him have told me he was fair to all.   Daddy disciplined with a heavy hand and I wore the marks of his discipline many times in my 14 years with him.  He loved us and only wanted us to behave better than many of the people he dealt with on a daily basis.   He wanted us to be kind neighbors, good friends, to work hard and to trust in the Lord.

I am writing this from the perspective of a young girl, who from the time I can remember realized that my daddy had a dangerous job.  It takes a special person who is willing to wear a badge every day to protect people, even the people who would like nothing more than to see that same police officer die.  Yes, there are some bad people who wear a badge, but the majority are decent, hardworking men and women who sacrifice daily to put the well-being of others before themselves.  Daddy never shot anyone in the 12 ½ years he was a trooper, but he did shed tears over many lives lost and for the innocent people who were hurting because of violence or abuse.

Growing up in the home of a trooper, I learned early that some people were just mean.  We had to be careful who we talked to, not to answer the door if Daddy wasn’t home, and most of all not tell anyone what his schedule was.    The first time that I realized not just Daddy, but that our family was in danger was when I was in 5th grade. We lived in a county where there was a violent coal strike.  The Kentucky State Police and other law enforcement were responsible for the safety of the miners who chose to work, ignoring the strike.  Because Daddy and his fellow troopers stood up for people who were trying to make a living for their family, they were the “bad guys.”  I remember the day that Mama and Daddy came to school around lunchtime and took my brother and me home.  The school had been threatened because we attended there.  Christmas break was extended that year for my brother and me, to keep us and every student at the school safe.   People who had been our friends for years turned against us.  Friends who had shared meals with us and worshiped with us turned their backs.  A few friends remained loyal but the tension of the coal strike caused Daddy and Mama to reconsider where we should live.  That was the winter of 1977-78.   Daddy requested a transfer from Post 16 in Henderson to Post 3 in Bowling Green in the summer of 1978.   With that transfer we moved home to Butler County.

August 7, 1981 was a hot, humid day.  I had just turned 14 and my brother, Daren, was 9-years old.  My mama was in the hospital, so Daddy took Daren and me to Mamaw Ruby and Papaw Raymond Givens’ house, along with our laundry that morning.  Daren and I hugged him bye and before he left I asked what time he would be back to get us.  Daddy’s last words to me were “I’ll be here around 4, Good Lord willin’ and the creek don’t rise.”   He was a detective then and drove a pale green sedan.  We watched him drive up the hill away from us, not knowing then that would be the last time we would see him alive.  It wasn’t the Lord’s will for him to pick us up at 4 o’clock that day.

I helped Mamaw in the garden and Papaw was at work.   I was getting ready later that afternoon around 3:30 p.m. to go to the hospital to see Mama.  Someone knocked on the bathroom door.  I thought it was Mamaw Ruby, so I said to come in and there stood a trooper.   He told me that I needed to hurry up and go with him.  He told us that Daddy had been shot and that he was there to take us to the Medical Center to be with Mama until we heard more on Daddy’s condition.   I remember the numb feeling, the gut-retching fear that consumed me.   I remember running to the police cruiser with one shoe on, one shoe in my hand.  My hair was wet and uncombed; all I could do was cry.  Mamaw Ruby rode up front with the trooper and Daren and I rode in the back seat, holding hands.   The fun memories of riding in the back of Daddy’s cruiser were erased with that ride.  That ride is one that I wish I could forget.  Thirty nine years later, the memories of that day are as fresh and the emotions as raw as they were on that August afternoon in 1981.  Daddy was shot at 1:54 p.m., according to his death certificate he died at 4:05 p.m.   The Medical Center staff cleared the room next to Mama’s and that was where I slept that night.   It was a horrible night, sleeping in a strange room, strange people stopping by to ask if I was okay or if I needed anything.  I just wanted to be at home in my own bed and to wake up and find that everything really was okay, but it wasn’t.

Many Butler Countians witnessed the seemingly endless funeral procession; hundreds filled Smith Funeral Home and Union Missionary Baptist Church, with rows of people lined up outside in the hot afternoon sun.   To the people who loved Daddy and have shown love to our family, thank you.   Law enforcement officers aren’t just peace officers, they are spouses, parents, brothers, sisters, friends and their presence in our society should help us feel safer than we would be without them to serve and protect us.  My daddy loved peace and strived to live in peace.  Otherwise, I don’t believe he would have risked his life every day to try and keep peace for the people he served.  “Blessed are the peacemakers, for they shall be called sons of God.”  --Matthew 5:9

As tragic as our story is, it doesn’t end there.  We have this promise from God, “And we know that all things work together for good to them that love God, to them who are the called according to his purpose.” --Romans 8:28.  I am 53 years old now.  I know that the Lord used Daddy’s death to teach me some valuable life-lessons, the best lesson -- forgiveness.  Through this lesson I am reminded that in order to be forgiven of my sins and failures, I must extend forgiveness to those who have hurt me.  I had carried hatred and anger for many years, but on February 15, 2013, I felt the Lord audibly speak His Peace to my heart.   With that experience, the peace I had struggled to find since I was a scared 14-year-old girl washed over me like an ocean wave.

I am writing this because Vendl Phelps is my daddy.  I realize that his life is no more valuable than any other life, but it is precious to me and my family.  I am sad that Daddy wasn’t there to walk me down the aisle on my wedding day, he didn’t get to enjoy his grandchildren and great-grandchildren and he didn’t get to grow old with Mama.  But I do know that Daddy loved the Lord and according to the Bible, our family will be reunited again at the restoration of all things in Christ.  We’ve shed many tears the past thirty nine years, but on that day there will only be happiness and peace.