FEATURE: Mandolin make its way from Canada to NC & into the hands of a young man with ties to Butler Co. 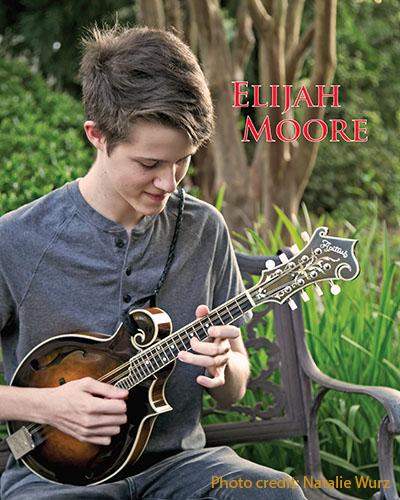 The following story was originally posted as a blog by Oliver Apitius of Apitius Mandolin Company in Mulmur, Ontario Canda.  It chronicles how a special mandolin made its way from Canada to North Carolina and into the hands of a young man with strong ties to Butler County.  The story is reposted here with permission.

Back in 2016, my wife and I set up a trade show booth at the IBMA's World of Bluegrass in Raleigh, North Carolina. One thing that impressed us while there, was the number of young people who have taken up bluegrass as a serious pursuit. It made us feel great to see that this traditional art form is presently in very good hands. The level of playing from these young folks was nothing short of astonishing!

One young man in particular caught my attention. He and his father stopped by our booth to try out the mandolins. I remember getting a vibe that these were great people. You know, polite, humble and honest. I came to know that the young man's name was Elijah Moore and his father's name was Eric. Well, Elijah sat down to pick some, I believe he was just 12 at the time, and boy what a player he was. I just got the feeling that I was watching someone with a real gift.

After having a nice chat for a while, they moved on to see more of the show but I could see that Elijah really liked my mandolins. Of course, though, it's not easy for a 12-year-old to afford a top level mandolin!

My wife and I went back to Raleigh with our booth the following year in 2017. We were very happy to see Elijah and his dad there again and again, Elijah picked up one of the mandolins that I had there and really impressed us with the progress in his playing. We had another great chat and I believe that I gave him some promotional merch that we had with us to take home as a souvenir. 'just something about Elijah and his dad that I liked. 'good people.

Well that was that and we went home and haven't been able to attend the IBMA trade show since. A combination of logistics and having no spare mandolins around for a show just made it unfeasible. It is truly a great show and we do hope to return someday.

A 12-year-old Elijah Moore at the Apitius Mandolins booth in 2016.

As fate would have it, a couple of months back a mandolin of mine became available to me again. As I pondered what to do with this mandolin, my wife suggested, 'why don't you give it to an up and coming mandolinist?' I immediately thought of Elijah and how he seemed to love my mandolins. So........, I have made an investment in the future and signed my youngest ever endorser of Apitius Mandolins! I have a feeling that the world will be hearing a lot more of this young man in the coming years!

Elijah is a 16-year-old, award-winning mandolin player from North Carolina. He started playing when he was 10 years old and is influenced by Alan Bibey, as well as his teacher, Ralph McGee. Elijah has won several contests to date, including first place, youth mandolin at the 2018 Old Fiddler Convention in Galax, VA. Elijah presently plays in the 2019 Telluride Band Contest Finalist Band, "One Fret Over". He is also a member of the Americana trio, "The Nomads".

Editor's Note:  Elijah is the grandson of Roger and Kay Moore of Morgantown.