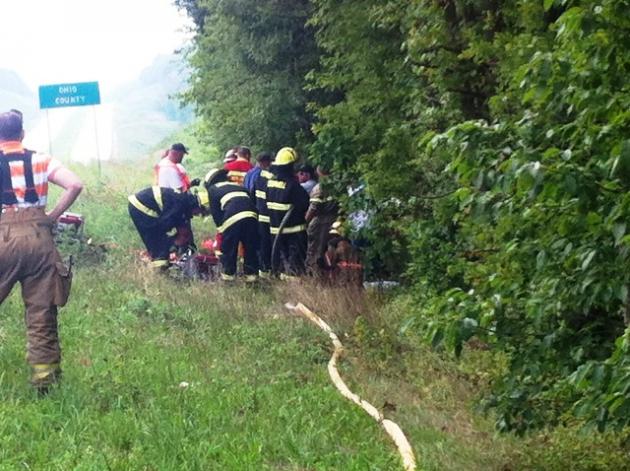 UPDATE: The names of the individuals involved in Sunday's accident has been released.  The driver was a 37 year old male, Silasgarzas Vivas of Libertyville, Ohio.  He was air lifted to Vanderbilt and his condition is unknown at this time. Male passenger, Jose Santos Salique-Guzman, 36, of Beaver Dam, Kentucky, was pronounced dead at the scene of the accident by Deputy Butler County Corner, Brian McKinney. According to Butler County Sheriff's Deputy Justin Deweese, the car was traveling northbound on the Natcher in the passing lane, when apparently the car drifted into the median, was over-corrected causing the vehicle to go into a side skid, leaving the road and striking a tree.

First responders are on the scene at an accident on William Natcher Parkway in Butler County near the Ohio County line. At least one person was initially trapped in a vehicle but has since been extracted by emergency workers.  There is one fatality. An Air Evac helicopter has been dispatched.  North bound lane has been shut down at the 37 mile marker of the Natcher Parkway. Names have not been released.

Stay connected to Beech Tree News for the latest on this developing story.