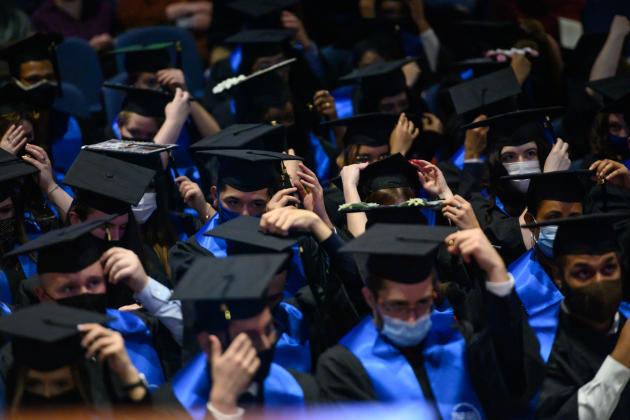 Yahng, who was introduced by Board of Trustees Chair Stephanie Zeigler, spoke to the graduates of the importance of their achievement during what he called "extraordinary uncertainties."

"When making decisions, it's important to weigh your options and think strategically about the next step," Yahng told students. "Identify your current options, and then look ahead at what position each option would put you in. Imagine what options you will have so that you will know in advance what you would do if it works out, or if it doesn't work out. Try always to put yourself in a position where you have a choice. If you haven't figured it out already, you already know that the probability of success in life improves when you have options."

A native of China, Yahng received his bachelor's degree from Berea College in 1963, and his J.D. from the University of Kentucky College of Law in 1967. Yahng grew up in Berea, where his grandfather, father and mother all worked and taught for a number of years at Berea College.

Following his graduation from law school, Yahng served in the United States Air Force from 1967-1972 and was honorably discharged with the rank of Captain.

Yahng was the Chairman of American Bridge (AB) from 1998-2013, a company known for its construction of complex steel structures, especially bridges, such as the Tappan Zee Bridge in New York, and the Mackinac Bridge in Michigan.

From 1999 to 2002, Yahng was a public governor of the Pacific Stock Exchange, which was reorganized and served as a business model for other exchanges.

Prior to his involvement with AB, Robert was a capital partner in the Law Firm of Baker & McKenzie, retiring in 1998. He joined the firm's San Francisco office in 1976, founded the Taipei Office of the firm, and assisted in the start-up of the firm's office in Shanghai. In the 1980s and 1990s, he served several terms as the managing partner of the San Francisco/Palo Alto offices of Baker & McKenzie. He also served several terms on the firm's policy committee. Robert has been a member of the Kentucky Bar Association and the State Bar of California.

During his legal career, Robert wrote articles for various publications and newspapers and has conducted seminars and given speeches for the American Management Association, the American Electronics Association, the Asia Society and other business organizations on legal aspects of doing business internationally. Additionally, he has co-authored several texts concerning U.S. history and U.S. government for the state of Florida.

Robert resides in San Francisco, California with Tina, his wife of 49 years. They have a son and a daughter.