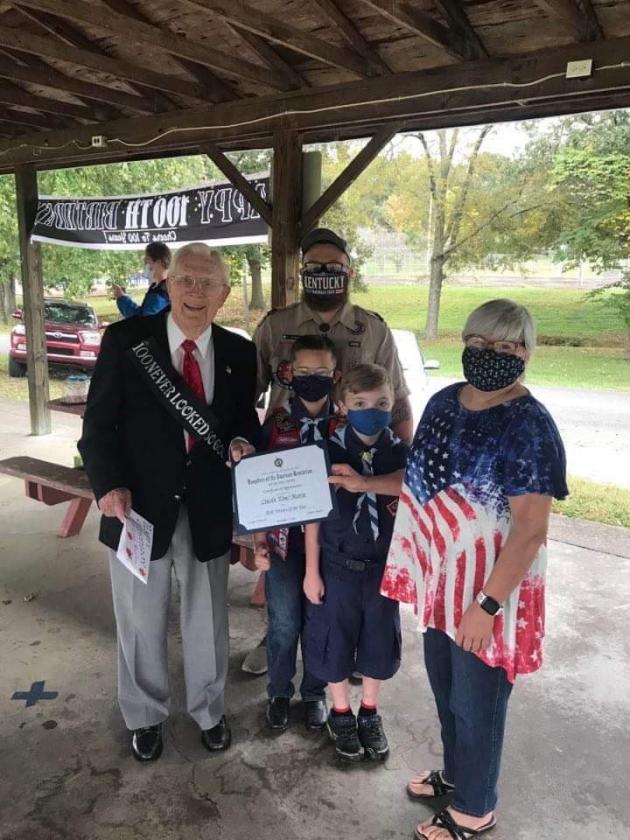 The year was 1920.  The last troops were returning from World War I. Warren Harding, from Ohio, was President.  Women earned the right to vote, alcohol prohibition was the 18th Amendment, and Elmo was born.

Elmo's friends call him Linc. He was born, raised, and went to school at Long Branch School Road, near Welchs' Creek, and at that time,  it meant a four-mile walk to Morgantown plus a ferry crossing. When times were hard is a vast understatement; there was no electricity, no indoor plumbing, no air conditioning or fans, no gas stove, and no tractor to work the farm.

Everyone had chores to do - bring in water, bring in firewood for heating and cooking, collect the eggs, hitch the plow to "Jim" the mule, and pull weeds in the garden.  These are just a few of the everyday chores for life in the rural areas.

Linc had an older brother, Otis, and two younger sisters, Bonnie and Irene. Remember, no electricity means no refrigerator, so they would get a twenty-five-pound block of ice from the Morgantown Ice Plant and make vanilla ice cream in the summer. It was delicious. Linc and Otis would often bring home fresh-caught fish from Welchs' creek, and their mother would fry them for the family. In season, the family would pick blackberries, which would make the best pies.

In 2016, Linc's family started putting all the short stories he had been giving them over the years together, and the book, "Butler County Memories, "by Elmo Lincoln Martin was published. There are over one hundred stories about the good and the bad of rural life a hundred years ago. A few Butler County residents can relate to these stories and add some for their families.

A few years before World War II, Linc traveled to Michigan to visit his sister and met Ruth, the love of his life. After the war, they moved to Grand Rapids, Michigan, where they lived for thirty-two years and raised four children.

During the war, Linc rose to the rank of Staff Sargent and served from 1942 to 1945. He was involved in Germany's last-ditch effort, "The Battle of the Bulge ."

Saturday, the Butler County Chapter of the Daughters of the American Revolution presented Linc with the award for "2020 Veteran of the Year, "and Cub Scouts Pack 208 gave him a birthday card they made. There were many family and friends at Charles T. Black City Park to wish Linc the best.

Linc's book is available on Amazon.  He is also on Facebook.

In November, we will continue with his story.