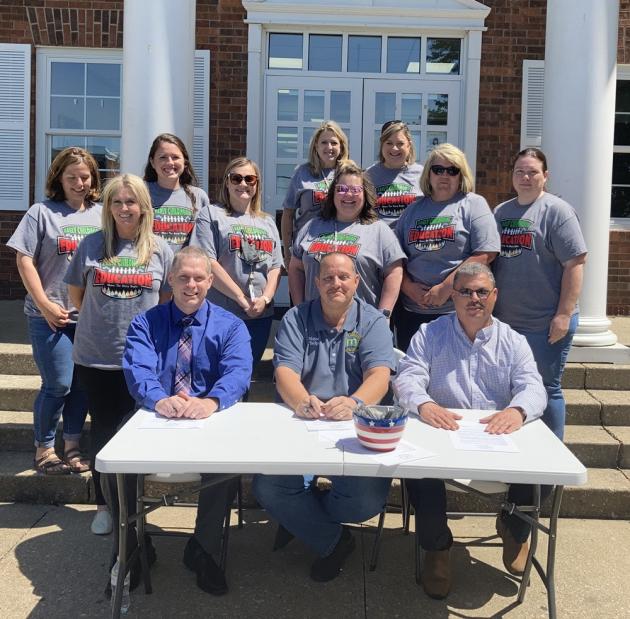 The Proclamation signing took place on the Butler County Courthouse Lawn with Judge Tim Flener, Mayor Bill Phelps, and Superintendent RobertTuck, along with Head Start staff, BC School Staff, child care directors, and community members in attendance.  May 7, 2021 was chosen in Butler County as Early Childhood Education Day as it comes as a joining of National Teacher Appreciation Week (May 3-7) and National Child Care Provider Appreciation Day (May 9).

Butler County’s community leaders and early childhood advocates recognize that the youngest children are the future of our community and wanted to take the time to recognize all of the early childhood educators who nurture, teach, and care for children in various settings in our county. These settings include child care centers, family child care homes, school- and community-based preschools, and Head Start programs.

After opening comments and tributes of appreciation by Morgantown Mayor, Butler County Judge and Superintendent, Dr. Amy Hood Waddle provided comments to group in an effort to stress the important roles that families, friends, and early childhood educators have during the first five years of a child’s life.  “Ninety percent of a child’s brain is developed before they ever go to kindergarten” Dr. Waddle stated.  She went on to stress the importance of language and ensuring children have opportunities to hear and express language during the first five years stating that hearing it on tv or iPad is not the same.

Beth Schaeffer, Chairperson of the Tri-SKY Council presented a history of Child Care Appreciation Day, a day set aside to recognize the work of those in child care settings.  Child Care providers have been essential during this pandemic taking care of children so parents could get back to work.

The Tri-SKY Council also sponsored Champions for Children awards on Thursday May 6. This included a process where individuals were nominated in the three counties for a variety of awards to recognize various strengths and characteristics of early childhood providers.  There were several nominees from Butler County, they include:

Angie Akers, Little Rascals Day Care, Angie was nominated for a variety of awards because of her 32+ year service to child care in Butler County. Angie has worked as an owner, director and is currently an infant teacher and has fun everyday with her babies!

Sheila Neil, Little Rascals Day Care, was also nominated for several awards, including the Calming Agent. The nomination said that Sheila is a “go to” person as she can help calm down any child.

It was also noted in the awards that these 2 ladies, never slowed down during the COVID pandemic the minute the state re-opened child care.

Kim Cunningham, from North Butler Head Start was nominate for the Weird Science award.  The nomination read, Kim has a love for nature and all things outdoors. She brings that love and passion inside the classroom and shares with the children.

Crystal Phelps, Caterpillar Lane, was nominated for the Rock A Bye Baby award for her love of watching children grow, her interactions with the children and her excitement make her a winner at their center!

Carolyn Damron, Caterpillar Lane, was nominated for the My Corona award, a new award this year specifically for someone who went the extra mil to ensure the safety of children and staff as centers and programs reopened.

Mr. Scott Howard, former superintendent, was nominated for the Lifetime Achievement Award for his dedication to children and the time he spent helping raise awareness of the early years and education.

In addition to those nominated, Butler County had five winners of Champions of Children Awards.  The winners included:

Michelle Phelps Tutko, North Butler Head Start  – The Enthusiastic Dedication Award.  This award targeted an early childhood professional who arrives to work with a smile and is enthusiastically ready to make the day great for children, a team player supporting their co-workers and adds sunshine to the day of all those around.  Ms. Tutko’s nomination read that even on a “rainy” day you can see her passion for children and families shining!  Her enthusiasm and smile are contagious!

Ali Johnson, North Butler Head Start - Unique Focus Award. This award was designed for an early childhood educator who specializes in providing for the unique needs of each child in their care.  Ms. Johnsons nomination included information about how she takes the individual child’s needs and adapts the lessons to ensure that the children accomplish their goals.

Dr. Amy Hood Waddle, Early Childhood Advocate, was presented with the Commitment, Impact, and Service Award.  As Ms. Schaeffer presented the award, she quoted Kenneth Blanchard, “There’s a difference between interest and commitment. When you’re interested in doing something, you do it only when it is convenient.  When you’re committed to something, you accept no excuses, only results. Ms. Schaeffer indicated that during Amy’s 32 years in the field of early childhood, she was committed to advocating and doing what was best for young children and that she had impacted many children, families, and teachers.

With the help of the Tri-SKY Community Early Childhood Council, along with other community partnerships, Butler County has a variety of community programs that are available for all children, birth through five years old. The OWL Academy, the LEAP Bus, Story Hour and Toddler Tales through the Public Library, Little Learners through Family Enrichment Center, along with the regulated child care settings, Head Start program and the public preschool program.  The Council also hosts special events such as the Early Childhood Cruise-In that was held in March as well as training opportunities for early childhood educators.  The Tri-SKY Council has just submitted their grant request for funding for the upcoming Fiscal Year with a wide array of projects to serve children, family and early childhood educators in the near future.