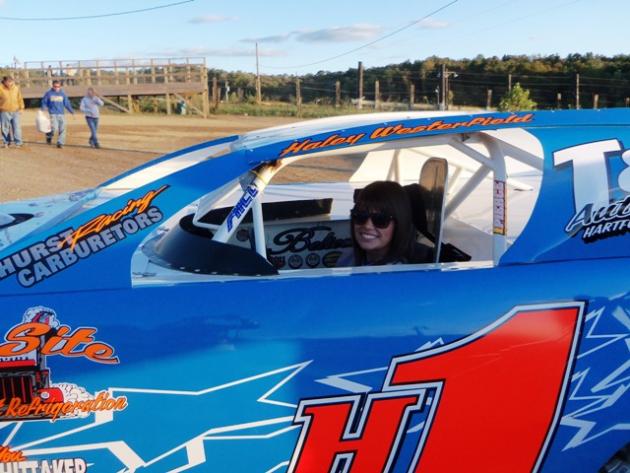 It’s Saturday night, October 1st, at Cedar Ridge Speedway—the final night of the season for the Butler County track.  Trucks pulling trailers loaded with dirt track cars have been arriving all afternoon.  Around the track, seasoned drivers and pit crews unload open wheel and stock cars.  Haley Westerfield is talking to her mom, Misty, who is working registration.  Haley is waiting for her dad, Jimmy, to show up with her blue number H1 ride.  It’s the last place you would expect to find an eighteen-year-old former cheerleader (eight years at Ohio County schools) and beauty pageant winner (at least a hundred trophies to her name), but this is right where she wants to be.

Haley, now a freshman at WKU, has been driving on dirt tracks since the age of fourteen.  She grew up around racing.  Dad, Jimmy, holds three state titles in the open wheel modified division, so it was a natural transition for Haley to go from spectator to driver.  Jimmy has always been right there with her from the beginning, literally riding beside her in a two-seater for her first race in a rusty bolts division.  She finished second and was hooked.  “It was a ball!” she remembers.

Haley moved from the rusty bolts class to a cruiser car when she was sixteen.  It’s the only car she ever flipped.  An axel fell from under a car in front of her, and she was on top of it before she realized what had happened.  She ramped the axle and flipped the car onto its side.  Her mom remembers the crowd at the track holding its collective breath in stunned silence before Haley’s dad and a friend rushed to make sure Haley was alright. “They had the car ready to race again by the next weekend,” Haley dismisses, “I’ve never done any major damage to a car.”

She is finishing out the season with the same motor she started with, although the body of the car has been changed out three times.  Haley likes to mix it up with her paint schemes.  The current one is blue, but her favorite was done up in a pink, Breast Cancer Awareness theme.  That paint scheme touched a lot of people, and opened a door for those who have been touched by the disease to share their stories with her.

These days, Haley drives in the limited modified division.  At Cedar Ridge, she is the only female in that particular division, but there are female drivers who race in other classes at the speedway.  “When I started racing, there would be just one or two girls at a race,” she says, “It’s good to see the girls really stepping it up.  Girls like to go fast too,” she adds with a smile.

Haley will run one more race to finish out this season.  She’ll be running at the Windy Hollow race track, near Owensboro, the very next evening, Sunday, October 2nd.  That race will complete a full thirty-eight race season, one that runs from April through October.  This is her first full season in the limited modified division.  According to the UMP (United Mid-West Promoters) points system—based on how the driver finishes and number of cars competed against—Haley is ranked third in the nation.  It is an impressive accomplishment for an eighteen-year-old.  “I’ve got a good teacher,” she says, nodding at her dad, “He’s been racing forever.”

Although the season is quickly drawing to a close for this year, you can expect to see her back on the track next spring.  For now, it’s back to the books for the college freshman, who hopes to be an ultrasound technician one day.  “Racing is definitely in my future for awhile,” she says, as she watches her dad unload the car.  The two pose together for a picture.  The resemblance is remarkable.  Racing for the pair isn’t just in the dirt, it’s in the blood.