Decker signs with KY Wesleyan; 2nd BC footballer to sign letter of intent 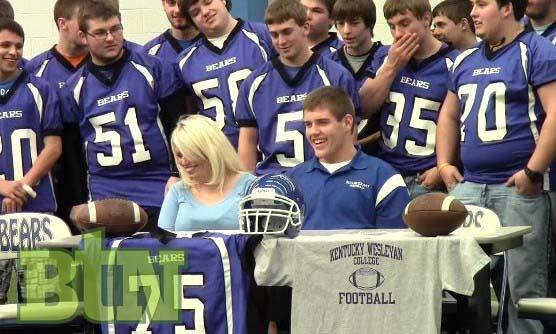 A second member of the Butler County High School football team has signed his national letter of intent to play college football; C.W. Decker, an offensive and defensive lineman for the Bears, signed his letter of intent to play football at Kentucky Wesleyan College on Thursday afternoon. Decker racked up 55 tackles on defense this year and had 60 pancakes as an offensive lineman. Decker is the son of Bridget Decker of Roundhill.

"I don't think I've been around a player more dedicated and works as hard as he does in all aspects of his life," said head coach Ryan Emmick of Decker. "He works each and every day to get better and better," said Emmick, "to make himself a better football player, to get himself into better shape, better condition, to make himself a better athlete, to become a better student, to become a better person. And today, this is a reward for that hard work he put in, this is a reward for the dedication and the effort. This is C.W.'s day."

Decker thanked all of the coaches, the players, and his mother just prior to signing his letter of intent.

After the ceremony, Decker said that Wesleyan was a good fit for him and the fact that it was close to home made it even better. "KWC is a good, Christian-affiliated school and it has a strong educational background," said Decker. He added, "I am very excited to go there."

His mother Bridget said, "I am very excited and very happy for him. C.W. is a straight-A student and you just couldn't ask for a better son."

"It was a tough decision for C.W. and I think he made the right decision," said Emmick, a KWC alum, "Kentucky Wesleyan has been there all along recruiting him since the beginning. I know that he has a good opportunity not only to get a great education but a chance to step on the field and play early."

Emmick went on to say, "The number one thing for C.W. is going to be his work ethic, it's unbelievable. He's here during our wellness class and he stays after to get extra work in. He's got size, speed, and he's explosive. A good lineman needs to have good feet, good leverage, and a good head on his shoulders and C.W. has all three of those."

The Panthers of Kentucky Wesleyan College are coached by Brent Holsclaw, a former quarterback for the Panthers. KWC is a Division II school and is one of the six charter members of the Great Midwest Athletic Conference.

Decker will join another BCHS standout at the college level, Clay Embry, who signed to play college football with Campbellsville University earlier this year.

Submitted by Amy Smith-Thomas (not verified) on Fri, 02/03/2012 - 11:50am
Congrats C.W.! You are such a great, smart, and talented young man. I am so proud of you. I look forward to seeing you show your talent at the college level. I am a KWC alum. You will have a great experience and will be provided with a wonderful education.
Submitted by Jonell Fields (not verified) on Sat, 03/03/2012 - 1:18pm
Congratulations C.W.