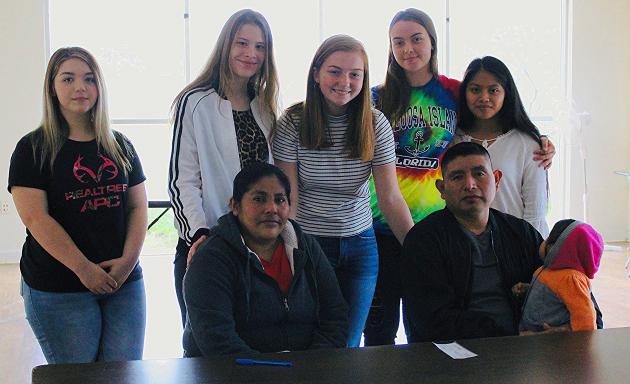 Gilmer Valesquez.  Do you recognize his name?  He is a sophomore at Butler County Middle School.  Gilmer was born with a defective kidney, leaving him with one still functioning. A few months ago, Gilmer’s health declined rapidly due to the ailing health of his remaining kidney.  He has now been at Norton’s Children’s Hospital since close to the beginning of the semester awaiting a transplant. His fellow classmates from the Butler County Area Technology Center felt they needed to do something to help their friend.  With the blessing of their DECA sponsor, Mr. Stanger, classmates Bailey Collins, Emily Tyree, Belmara Rafeal, Bella Hunt, Rebecca Chapman, and Katlyn Beasley set out to brainstorm ways to raise money for their classmate and friend, Gilmer Valesquez.

The girls were able to raise $1,000 to donate to Gilmer’s family.  Friday, October 25th, they met with his parents to present them the check.  The students stated they appreciated those who donated and will continue fundraising for Gilmer if at possible.  Both of his parents work full-time and have two other children to care for as well. Currently, they have no more vacation time and are only able to visit Gilmer in the hospital when they have days off and their bills continue to pile up.

When asked the biggest obstacle encountered while fundraising to help with Gilmer’s medical expenses, tears of frustration spilled down a couple of the student’s faces.  All stated that most of the pushback they received was because people did not know him or his family, it was because they weren’t “originally” from here, and a list of other comments and reasons that wouldn’t be nice to put into print.  Despite the various responses they received, these six girls were filled with a mixture of tenacity and compassion that enabled them to meet their goal. At the end of the day they girls saw a need for a fellow student that had to be met.  They do not see race or ethnicity; they simply see a sophomore from BCHS that is in dire need of a transplant or he could die. They see a loving family that is working hard to build a life here while trying to care for their ailing son as well.  They see a peer, a friend, a son, a brother, a child; they simply see an individual. The trial this family is facing could very easily be a similar situation that we may find ourselves in one day as well.

If you are interested in helping the Gilmer Valesquez family, you can reach out to the DECA Club of the Butler County Area Technology Center.  DECA would like to thank everyone who donated.