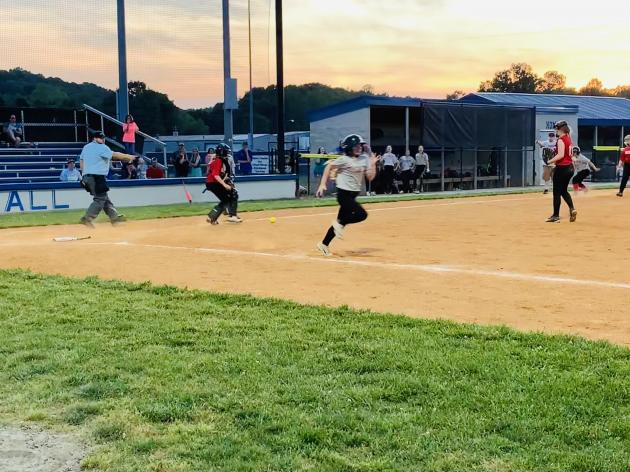 After a rain-filled spring, the Butler County Jr. Pro Softball League wrapped up their season Tuesday night with a single elimination tournament. The Crimson Tide, coached by Kyle Newcom, came into the tournament as the top-seed and left with gold medals. The Crimson Tide racked up an impressive 13-1 record during the regular season. The Crimson Tide defeated the Hilltoppers in the gold medal game.

Bailee Proctor, Crimson Tide, stretches for the ball as Hannah House, Hilltoppers, tries to make it safely to first.

"This season has been an amazing season," said league coordinator Katie Gary, "Each team showed steady improvement throughout the course of the season which made for some very exciting games. We would like to thank everyone who had a part in making this season a success. Thank you to our players, parents, coaches, and sponsors for your continued support. The league is especially grateful for our coaches for volunteering their time to work with their teams."

Butler County Jr. Pro Softball is a fastpitch softball league for girls ages 9-12. Their season runs from March through May with games being played during April and May.