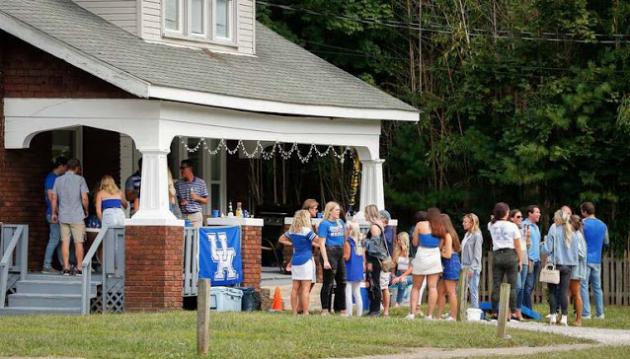 The state recorded 456 more cases of the novel coronavirus yesterday, virtually guaranteeing that it will report the highest weekly number of cases yet, once the numbers are checked and adjusted.

The seven-day rolling average of daily new cases was 733, midway between the previous two days, and the unadjusted number of cases for each of those 7-day period was more than 5,100. The highest number for any of the state's official Monday-to-Sunday reporting weeks has been 4,742, Aug. 31-Sept. 6.

“We know we must do better if we want to continue on the path toward regaining the parts of our lives that have been on hold,” Gov. Andy Beshear said in a press release. “If we want to protect each other and our economy, if we want to get our kids back to school, the message is clear for Team Kentucky: Wear a mask, maintain social distance, wash your hands regularly and avoid crowds.”

Neighborhoods around the University of Kentucky campus were filled Saturday afternoon "with large groups of young people, most of whom were not wearing masks," Karla Ward reports for the Lexington Herald-Leader. "Scores of students attended parties in yards in the area around Elizabeth Street," off South Limestone Street, as the UK football team played its opening game in Auburn, Ala.

Also on Saturday, Lexington reported 110 new coronavirus cases, exactly half of whom were college students. Ward noted concern that cases from the campuses are keeping Fayette County from returning to in-person schooling, as most counties will Monday.

Nikki Fast Pollock, who lives in a neighborhood near UK's football stadium, told Ward that seeing students in hold parties without masks or social distancing is “just kind of like a slap in the face.” Ward reports, "She said her son started kindergarten this year, and she’s had to explain to him that maybe he’ll get to go to school later, but he has to learn on the computer first."

University spokesman Jay Blanton "said UK and Lexington police have been sharing information about reports of large gatherings, and university officials are 'following up with property managers' when they get reports about specific addresses where parties are being held," Ward reports. Blanton said a socially-distant football watch party at UK's baseball stadium drew about 500 students.

"Students who violate UK’s social distancing policy, even if the violation is off campus, can face consequences ranging from a warning to suspension or expulsion," Ward notes. "So far this year, UK has found about 100 students guilty of violating the rules."

Lance Poston, a UK official helping run the university's response to the pandemic, told the Fayette County school board last week that only 5.5 percent of total exposures in UK's tracking system are among Fayette County residents not affiliated with UK, "meaning the university is not contributing in any substantive way to what would be characterized as community spread," the Herald-Leader reported.

--Schools in Clinton County resumed in-person classes Wednesday, Sept. 23, after going remote and initially planning to be on a covid-driven hiatus until Oct. 12. Supt. Tim Parson "said he didn't think the county would recover so quickly, the Clinton County News reports.

--Sixty of the newly reported cases were in Kentuckians 18 and younger, of whom 10 were 5 and younger, the release said. The youngest was 2 months old. Other figures won't be announced until Monday due to limited reporting on Sundays, Beshear's release said.