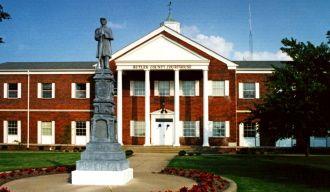 Courthouses will be closed statewide and all court services will be unavailable Monday, August 6, as the Kentucky Judicial Branch shuts down for the first of three furlough days in 2012. This will be the first time since Kentucky’s modern court system was formed in 1976 that the Judicial Branch must close courthouse doors to balance its budget.

The furloughs will affect only non-elected court personnel, who will be off work without pay as part of the Judicial Branch’s Fiscal Year 2013 Budget Reduction Plan. The entire court system will be closed Monday, Aug. 6; Tuesday, Sept. 4; and Monday, Oct. 15. This includes the Supreme Court, Court of Appeals, Circuit Court, District Court, Offices of Circuit Court Clerk, the Administrative Office of the Courts and all court services, including Pretrial Services, Drug Court, the Court Designated Worker Program, Court Interpreting Services, the State Law Library and driver license branches.

In Butler County, the only office that will be closed is the Circuit Clerk's office. There will be no court services or jury duty on any of the furlough days as well. All other offices will remain open.

The Supreme Court of Kentucky has approved two orders that provide guidance on how the statewide court closures are to be implemented. While the two orders provide more detail, below is a summary of what the public and the law enforcement and legal communities should expect on furlough days:

• Trials and other court proceedings will not be scheduled on furlough days as there will be no staff available. Items already on the docket for those days will be rescheduled.

• Driver licenses will not be issued.

• The Supreme Court will suspend its rule requiring pretrial officers to interview a defendant within 12 hours after incarceration. No Pretrial Services staff will be working on furlough days.

• Deputy clerks will not be available to process bonds and no release orders will be issued.

• Local court designated workers will not be available. The Court Designated Worker Program will have a supervisor available to ensure that law enforcement adheres to its statutory requirements in cases involving the arrest and custody of juveniles.

• Technology Services staff will not be available to recover the CourtNet database in the event the system experiences an interruption in service.

• County offices that share space with the state court system in courthouses and judicial centers will not be affected.

Furloughs are one of several measures included in the Judicial Branch’s FY 2013 Budget Reduction Plan. The 2012 Kentucky General Assembly reduced the total funds available to the Judicial Branch by $25.2 million for FY 2013. This included a permanent reduction to the annual base operating budget of $16.2 million and a one-time transfer of $9 million in payroll to the state’s general fund on June 30, 2012. Since the economic crisis began in 2008, the Judicial Branch has sustained repeated reductions to its budget and has cut 282 employees statewide, eliminated court programs and trimmed operating costs at all four levels of the court system to stay within its budget.

The Supreme Court and leadership from the Administrative Office of the Courts will meet in January 2013 to determine if additional furloughs and reductions are necessary for the remainder of FY 2013, which runs July 1, 2012, to June 30, 2013. They will also begin drafting a budget reduction plan for FY 2014, which presents an even greater shortfall than in FY 2013.