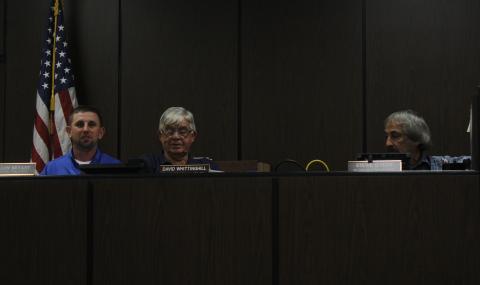 A total of approximately 55 part-time and full-time employees working under the county will be receiving a 50 cent raise per hour in the upcoming fiscal year.

A motion was approved to give raises of 50 cents to all full-time county employees working for departments under the Butler County Fiscal Court. These departments include road, recycling, animal shelter, 911, ferry operators, judge office staff and jail. Third District Magistrate Timmy Givens made the motion. The raise does not include salary individuals.

Givens also proposed a 75 cent raise for one individual employee who has been employed with the county for 27 years. Attorney Richard Deye recommended reviewing the personnel policy to see how this specific proposal could be accepted. Givens agreed to withdrawal his original motion for the additional raise and suggested tabling it until the next meeting to allow the court time to look into the proposal.

Fourth District Magistrate David Whittinghill made a motion to give all part-time county employees a raise of 50 cents as well as full-time employees.  Givens asked if they had it in their budget to give all additional employees the raise. Treasurer Becky Jacobs confirmed that they do. Givens then questioned what this would do to their funds for retirement within the next year. The motion was approved with a vote of 4-1 with Timmy Givens opposed

A progress report by Circuit Court Clerk Sherry Johnson was given on the work that was recently started at Circuit Court Clerk’s Office. Updates to the office include a full glass storefront as well as new lights and rewiring to the office. Johnson said the framing has been done, but the glass has not yet been completed. The glass will be inserted this Friday and door handles and lights for the office will also be completed soon. Johnson also said that the office will be closed on July 13 due to a new program implemented by the state that will require a new system to be installed.

Butler County Jailer Ricky Romans was present to speak on behalf of items related to the jail. In relation to the policy and procedures, Romans said they have updated their admissions and booking policy in accordance to the recommendations made by KACO to allow for more in-depth procedures. The Department of Corrections has approved more classes to be offered at the jail including helping men re-enter the community and a drug recovery program (MCRC). A motion was made to accept these classes into the list of existing programs.

Romans also discussed the need for a new commercial air fryer ($1,500)at the jail due to their current one being almost 30 years old. Judge Executive Tim Flener also added a motion to approve up to $1,000 for installation and electrical work for the fryer.

A motion was made to approve USS for the repair on the Butler County Courthouse Wings. A mistake was made in the original motion regarding the amount of piers. A motion was made by Kevin Phelps and seconded by David Whittinghill to amend the motion to be nine piers on each side of the courthouse.

A motion was made to adopt and sign resolution between Butler County Fiscal Court and Commonwealth of Kentucky, Transportation Cabinet Department of Highways in the amount of $312,086.00 for Caney Fork Road and Love Brooklyn Road. The original amount awarded to the county was $240,000 however, Judge Flener said the road department agreed to take on the additional bit of road work needed on Caney Fork Road which was not originally accounted for. The county was able to receive additional funds to complete the remainder of the road resulting in an increase in the amount of funds awarded.

A motion was made to approve Liter Abatement checks to the following:

BCHS Lady Bears Basketball in the amount of $500.00

A public hearing will be at 5:00 p.m. on Monday July 15 regarding an entertainment application that has been submitted for Cedar Ridge Raceway.

Whittinghill proposed a date for the North Park Festival for Sept. 21 at 4 p.m. at the Northside Pavilion. The motion was approved.

Other items of business included:

Motion to approve payment to Advanced Heating and Cooling in the amount of $5,200.00 for AOC A/C unit replacement

Motion to approve payment to Kinser Heating and Air Conditioning in the amount of $3,700.00 for AOC A/C unit replacement

Motion to approve Butler County Emergency Management to purchase and pay for rescue equipment not to exceed $2,000

Rochester requesting Butler County Fiscal Court to match their grant for sirens in the amount of $3,500.00