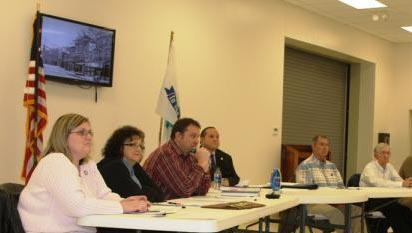 The Morgantown City Council acted to reduce pay for the Morgantown Utilities Board and to correct problems with ordinances covering the various boards in their regular meeting on Thursday, and it selected a new city clerk and two Utilities Board members.  Council member Allen Meredith was in the hospital and not in attendance.
Dale Adcock with the Utilities Board asked the Council to reduce its pay by 25 percent.  Mayor Billy Phelps said the request would have to be done in ordinance form.  On a roll call vote, the Council approved Adcock’s request 4-1, with Council member Russell Givens voting no.

Mayor Phelps brought up several ordinances covering the various boards which according to the state are supposed to explicitly list pay levels for certain officials.  The Council approved the 1st reading of ordinances which list the pay level of the maintenance supervisor, chief of police, and city clerk at their current level, and the pay of the Utilities Board at the 25 percent lower level.  The Council approved the 1st reading of another ordinance to fix changes to the Board of Adjustments which inadvertently eliminated legal authorization of the Planning and Zoning Board.

Mayor Phelps read a letter from City Clerk Anita Gossett announcing her retirement effective April 1.  Phelps recommended Jerrod Barks as the new City Clerk, which the Council approved. The Council went into closed session regarding two vacancies on the Utilities Board, after which Phelps recommended Harlan Dockery to replace Hugh Evans, who resigned earlier in the week, and Eddie Snell to serve in a vacant fifth seat on the Board.  The Council approved both Dockery and Snell.

Bruce White, Executive Director of the Boys and Girls Club addressed the Council to request $12,500 in funding from the city, the same level as before. White stated that the Boys and Girls Club serves over 500 children annually, averages 75 children daily in their after school program, and will be opening a new site at North Butler Elementary School in the fall.  White said he was not asking for a decision at this meeting but for consideration when budget decisions are made.

Mayor Phelps reported that ads have been placed in print media for sidewalk projects and that applications for pool employment will be accepted starting next week.  Phelps stated that city/county Cleanup Days will be April 23-25 and that arrangements are currently being made for the dumpsters.  MPD Chief Charles Swiney characterized his department’s February as “snow activity, not slow activity” with 371 calls for service.  Swiney reported a pursuit by Officer Embry which lasted 15 minutes and ended when Embry safely bumped the car off the road on Clifty Hollow Road, arresting River Lawrence on marijuana possession and other charges.

In other business, the Council approved the 2nd reading of an ordinance to transfer $50,000 from the city to the Industrial Holding Corporation.  James Dossey, vice chair of the Housing Authority, handed a report to the Council updating on Kent Manor renovations, condition of properties after the recent severe weather, and the state of the Capital Fund Grant.  Mayor Phelps announced a special session for March 30 at 5:00 p.m. to transfer new City Clerk Barks onto accounts and to have the 2nd reading of the various Board ordinances.