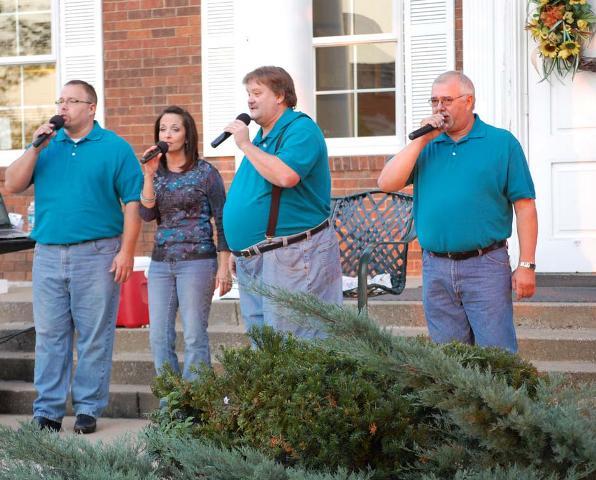 If the man in the moon likes good gospel singing he had to look no further than Saturday’s concert on the courthouse lawn. The featured group, Resurrection Bound, made their second appearance of the year. The concert, the last in the series for the year, was well attended and most appreciated.

Emcee, Doug Odle, encouraged everyone to “settle back and have a good time” and for over one and a half hours they did. The group consists of Chad Bridges, Donna Embry, Alan Romans and Terry Vanmeter. (pictured above)

Guests singers throughout the night included Becky Grise, Chad’s daughter Peyton, Donna’s daughter Hannah and Doug Odle. Special guests recognized in the audience included a couple from Zeeland Michigan and an upcoming birthday wish to Leburn Johnson who will turn 92 on October 16.

“I want to thank city and county officials as well as the tourism folks for their support,” said Odle. “We hope to start the series back up about May of next year. Hopefully, concerts would be the same Saturday of each month to make them easy to remember,” he added.

As the night ended, the moon peeked over the courthouse and helped light the downtown area. Next May can’t come soon enough.