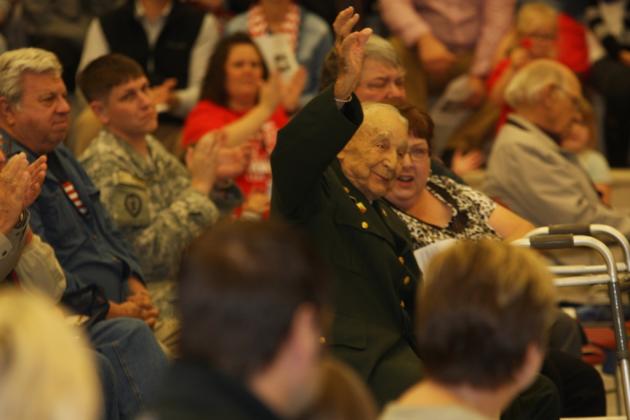 Young and old alike turned out Wednesday morning, November 11, to pay tribute to the veterans of Butler County.  The annual community Veterans' Day event was held at the Butler County High School gymnasium and organized through the Butler County School District with Morgantown Elementary guidance counselor Linda Tyree serving as the primary coordinator.

Butler County Schools' Superintendent Scott Howard welcomed those in attendance and describe the day as a "truly special event."  Howard thanked all veterans for their service and said this day was a "special time" for him as he remembers his late father who served in the U.S. Army during the Vietnam War.
The Butler County High School NJROTC, under the leadership of Chief Jim Melton and Major Robert Redmond, led the Parading of Colors.

The Pledge of Allegiance was led by officers of the Morgantown Elementary Flag Federation - Autumn Frazier, Keagen Grubb, and Liberty Franzell.

The Star-Spangled Banner and My Old Kentucky Home were performed by the BCHS Choir under the direction of Mr. Travis Lowe.

It was accompanied with American Sign Language by the BCMS 7th Grade Choir led by Jennifer Scott, teacher at BCMS.

A patriotic medley was performed by Mrs. Gail Gaddie's preschool class at MES and was accompanied by Mr. Ryan Himes.
Jennifer Odle of the VFW Post 5837 Auxiliary recognized Tommy Justice as their Vietnam Veteran of the Year.  Justice entered the U.S. Army in 1968 and served in Vietnam from June of that year until July of 1969.

Odle honored all of those who served during the Vietnam era (1955-75) during this 50th Anniversary Commemoration, including veterans who served "in-country" and those who supported them in other areas.  She also provided a brief history of the Vietnam conflict, dating back to French involvement in the 1950s.

Odle recognized the four Butler Countians who were killed in Vietnam - Roy Lee Felty, William Eddie Hocker, Jerry W Shain and Jimmy Sherrill.  She closed her remarks with a message to the Vietnam era war protesters, stating that it was these veterans who "fought for your right to protest."

Lynda Knight recognized Buddy Poppy Good Citizens of the Year.  They are Martin Brown, Spencer Cohron, Madison Coots, Taylor Leach, Tobin Maxwell, and Briley Webster.  Fifth grade students were asked to interview a veteran.  The winners above are the top six as judged by teachers.

Lois Russ recognized Don McKenney as the Butler County DAR Veteran of the Year.  McKenney entered the U.S. Army in 1966 and served in Vietnam, where he was awarded the Purple Heart.

Elaine Daugherty recognized William Boyd Truelove as the Green River DAR Veteran of the Year.  Truelove was in the U.S. Army and served in Vietnam in 1970-71, where he was awarded the Bronze Star.
The BCMS Band, under the direction of Mr. Jordan Evans performed America the Beautiful. Combined choirs from Morgantown Elementary and North Butler Elementary also performed.

Joey Elms, former staff sergeant in the United States Air Force, was the keynote speaker.  Elms, now postmaster at the Morgantown Post Office, served in the U.S. Air Force from 1995-2002.  He began his remarks by thanking Linda Tyree for her work in organizing the Veterans' Day program.  Elms honored veterans for their sacrifice.
"This is a great day to honor those who are still with us and to thank those for answering our nation's call of duty," said Elms, who also recognized family members who supported those who served.
Elms then spoke briefly about his military career, including the fact that serving in the military was something he never expected to do.  He worked on the B-2 Stealth Bomber, served in the NATO operation in Kosovo, and got to meet one of the pilots of the Enola Gay - Paul Tibbets.  The Enola Gay was the name of the B-29 plane that dropped an atomic bomb on Hiroshima, Japan during World War II.  Elms spoke passionately about the benefit of military service.
"It (the military) can be a ladder for their professional career for many and a pathway to the American dream," said Elms.  He cited current barriers that exist to military service, including lack of education, crime, and physical fitness.  Elms praised the Butler County School District for "taking steps to turn this around."  Specifically, Elms said he was encouraged by the district's recent embrace of the Leader in Me program, something he and his family became familiar with in Warren County.

Doug Odle read the names of the veterans in attendance, who were asked to stand then given a warm round of applause.
The BCHS Band, under the direction of Mr. Jason Ausbrooks, performed Salute to America's Finest.
Mr. Doug Odle, following a moment of silence, played Taps as veterans who made the ultimate sacrifice and those who have died.

Supt. Scott Howard wrapped up the ceremony thanking Linda Tyree for her efforts in making the program a success and described her as the "face of the program." Howard also expressed his appreciation to students for their attention and respect during the Veterans' Program.
The colors were retied by the BCHS NJROTC Color Guard.

Veterans and their guests were also invited to a reception in the B.C.H.S. Library provided by the B.C.H.S. F.C.C.L.A.