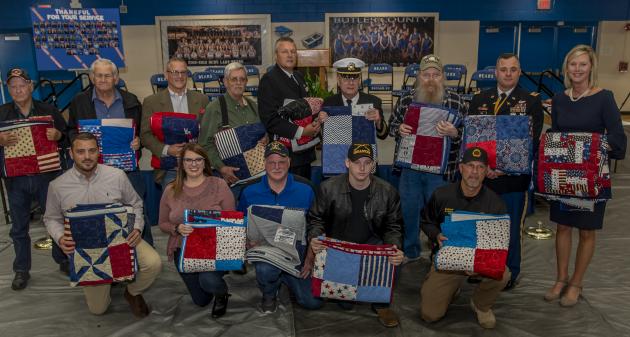 Veterans, their families, students, and community leaders gathered on Monday, November 11, at the Butler County High School gymnasium as part of a community Veterans' Day program.

Butler County Schools' Superintendent Scott Howard kicked off the ceremony and welcomed those in attendance.

The Butler County High School NJROTC conducted the “parading of the colors” under the leadership of Chief Jim Melton.

The invocation was given by Cody Russ, the youth pastor at Cool Springs Baptist Church.

Always a crowd favorite, the Butler County Preschoolers from Morgantown Elementary and North Butler Elementary sang "It's a Grand Ole Flag," while waving their flags.

The Buddy Poppy Good Citizens of the Year and Art for Heroes winners were announced by Sherry Webster of the VFW Post 5837 Auxiliary.

The Butler County Middle School Band, under the direction of Mr. Jordan Evans, performed "The Gettysburg Address" and arrangement by Michael Story.

The keynote speaker was retired Senior Chief Philip Stagner.  He served in the United States Navy aboard the USS Chicago, USS Maine, USS Ohio, USS Tennessee, and the USS Archerfish. His duty stations include the Naval Submarine School in Connecticut, Trident Training Facility in Georgia as well as serving as the Commander of the Operational Test and Evaluation Force in Virginia and Commander Naval Personnel Command in Tennessee. Stagner retired from the Navy in 2006 and currently teaches at the Butler County Area Technology School.

Stagner spoke to the theme "Home of the free, land of the brave." He spoke of the months underwater in a submarine, missing birthdays and holidays with family, and reminded us all that freedom is not free, someone is paying the price today and every day.

"I have been around the world four or five times underwater," said Stagner. Service changes you, I saw death and was fearful.Your charge is when you see a veteran go up and shake their hand and give them a heartfelt thank you for their service.”

Linda Tyree, an MES Counselor and organizer of the Veteran Program for the past 20 years, is retiring. The Butler County Piecemakers presented her with an extraordinary quilt with 20 blocks representing her twenty years of service, and the quilt contained a piece from every quilt they have made.

The BCHS Band, under the direction of Jason Ausbrooks, played a "Salute to America's Finest," which featured the armed service songs of each branch of service - U.S. Army, U.S. Air Force, U.S. Navy, U.S. Marine Corps, and the U.S. Coast Guard. Flags from each branch of service were presented by Boy Scouts Troop #208.

Veteran Doug Odle read the names of veterans in attendance.

Bryant McClellan played "Taps" following a moment of silence, and the colors were retired by the BCHS NJROTC to wrap up the program.

A reception was held in the library following the program. The BCHS Culinary classes of Mrs. Ruthie Minton provided refreshments and served.